I count many women all around the world as precious to me. I grew up with two brothers. This Christian sisterhood speaks new words of relationship to me. I am thankful for the role these ladies play in my life. While I am also thankful I never had to share my clothes or my Barbies or my room!

In ministry, I have the privilege of getting to know lots of people well. However, there remain those few who surpass even friendship and enter into a kindred relationship of sorts. The ones who become like the actual sisters I never had. My post today is about one of those friends. The one you call on a regular basis. The one you carve out time in your busy schedule for because you simply must catch up over lunch or a late night at Applebees. If you don’t have a friend like that, I would encourage you to pray for one. Get in touch with me and I’ll join you in making that petition. Because I count these friends as really, really important.

So important that when they go through something, no matter how hard or awkward, I am going to walk it with them. It matters not who else is there with them or whether they want my help or not. I attach myself to the situation.

Last spring, my friend found out her mom had breast cancer. The doctors found it early but that did little to alleviate the shock. For the next few months, her mom received treatment and they did successfully cure her cancer. Praise the Lord! Because her mom had breast cancer, and at a fairly young age, my friend’s doctor requested that she go in for her first mammogram. She did so and promptly received a call because they didn’t like the results. Something about calcium deposits they wanted to examine further. Now, my friend tends to get more than a little concerned about health diagnoses. Her family struggles with allergies and asthma, so doctor visits and medical treatments are not uncommon to them. And throw in the “C” word and she found herself fighting anxiety. She went to the Internet for more information (someone tell me why we do that to ourselves), where she read about every worst case scenario possible. And she waited. 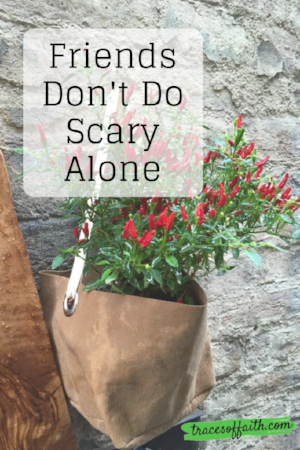 After a second mammogram, they agreed a biopsy was in order. No alarm intended but they needed more information to give an accurate diagnosis. In the meantime, life continued. Interesting how that works because time has actually stopped. All she heard over and over in her mind were the possibilities she now faced. Her happiness over her mom’s cure turned into her nightmare, wondering what genetics or just fate had handed her.

She waited a few weeks, a brutal fourteen days for the biopsy. In our visits, she shared her concerns with me. I tried to be a good listener. A supportive friend. As the day of the biopsy drew closer, I asked her who would be going to the appointment with her. She casually said she’d be taking herself. Apparently, the procedure doesn’t do anything to prohibit you from driving yourself to or from the appointment. The time spent at the hospital could be lengthy while you waited your turn and went through all the steps.

The day of the appointment, she drove to the hospital. I was equipped with my Kindle, money for a latte at the hospital coffee shop and prayers without ceasing. The procedure took a couple of hours. I caught up on a couple chapters of my book. All went smoothly.

The results came back a few days later. Cancer free!! But an at-risk candidate for the rest of her life. And so we have to give such news to God. And the next time there’s a scare, we rally our kindred troops together, we pray and trust the medical experts to provide us with the help we need. That’s what friends do. And we never let friends do it alone.