Our Children And The Truth

Bible study isn't a big picture kind of experience. Each group, each study is made up of a hundred precious moments. Little lessons I keep applying in my life a long time after we've ended discussion on a topic.

One morning, we were discussing the attributes of Jesus. What we appreciated most about Him. One girl responded how she appreciates that He speaks truth. She grew up in a home where truth was at times optional. Her parents would make promises they didn't keep. That impacted her deeply.

Her words that day impacted me deeply as well. I am raising a daughter. I want to be a voice of truth in her life. I want my daughter to consider me trustworthy and a safe person to confide in always.

Often times, though, the desires of my heart collide with the realities of our life. Mom, is there a Santa Clause? How does the Tooth Fairy know when we lose our tooth? How do moms have babies? Why does cancer make people die? We as parents have to decide how to be beacons of truth to our children. Every time a question arises.

Or when you really mess up and would rather lie about it.

For months, Allie has asked for a kitten. Her parents didn't want a kitten but we knew the joy it would bring our animal-loving daughter.

Our neighbors have several barn cats so we talked about getting a kitten from them. For a couple weeks Allie visited the babies who had just been born every day after school. She selected the one she wanted and named him Tom.

Finally, the weekend came when Tom would be mature enough to leave his mom and come home with us. Except Tom disappeared. As often happens in life on the farm, something happened to the kitten.

Our Allie was, understandably, heartbroken. We wanted to make this right. Winter was approaching so the chances of finding a kitten were slim until spring. Just a few days later a friend posted on Facebook that she had barn kittens if anyone was looking.

We waited about a week and went to pick up the next Tom (Allie had decided every male cat of hers would bear the name Tom). We got to choose from a couple of the more tame barn cats and this sweet little kitten came home.

A love affair began that day. Allie carried him everywhere. She read to him, sang to him, baptized him. Things were going great.

Tom was still very little. He wanted to be near his littermates (now us) all the time. About a week after we had him, I went to get Allie from school. We kept Tom in the garage a lot while we were gone because it was wintertime and we feared predators.

I put him far away from my car and proceeded to back out. He ran after me quickly. Before I even had a full wheel cycle, I heard a frantic meow. I immediately stopped the car and checked on him. He had run to the front of the garage and seemed OK. I left to get Allie.

Upon our return, she jumped out of the car to look for her kitten. He was now by the door of the garage that goes into the house. She picked him up and said, "Shhh, Mom, he is sleeping." 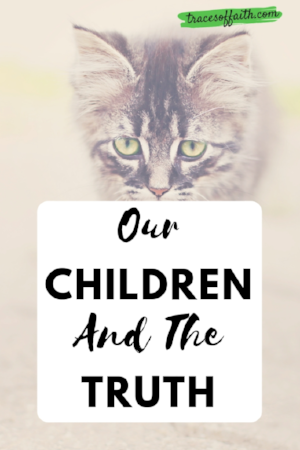 Folks, he wasn't sleeping... but you knew that already, didn't you? From what I read, he must have suffered internal injuries. Probably only lasted a few minutes after I left.

Remember, I am practicing truth. Honestly, I wasn't trying to be honest in those next few moments. I had just formed a habit of telling her the truth. So, I explained to her what Mom had done. And that Tom hadn't survived.

Yuck! Sometimes telling the truth hurts. Sometimes we think it might break our heart. We buried Tom (I nixed the idea of inviting people to his funeral as he was only our pet for a week). My budding artist went inside and, through her outpouring of tears, drew pictures of Tom. Underground in his burial plot. Being taken to heaven by angels. In heaven with God (she did baptize him thankfully). For weeks we had random tears over the death of her pet. At the accidental hands of her mother.

Maybe I shouldn't have told Allie the truth of what happened that day. It caused her a great deal of sadness. May God grant me discernment next time I have to decide how much truth I should tell her about a situation. Truth matters.

But here's the thing. I won't always tell her the truth even though I've set out to do so. I will forget. Circumstances will change and I'll have to let her down. I might come across a situation where I keep the truth from her for various reasons.

Which takes us full circle back to my friend in Bible study. The one who loves Jesus because He always tells the truth. I realize, even more than telling the truth, we read in John 14:6 that He is The Truth. Something I am not. In no circumstance can Jesus lie because He is Truth. The Way, the Truth and the Life. As this lesson settles deep into my heart, I realize I need not be so concerned about always, always telling her the truth. My focus needs to be on introducing her to Jesus, The Truth.