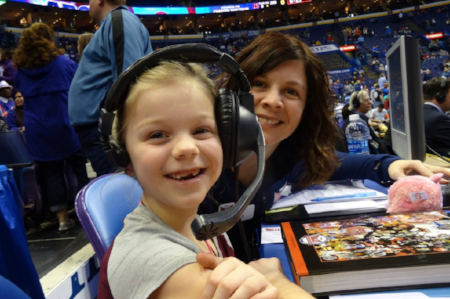 Part one of this post concluded with borrowing two of my favorite words from the Bible: But God....

I made the most of the brief encounter doing that class project with the sports information office. I spent my senior year interning in the sports information office at Missouri State University. I worked office hours, helped with stats at football, field hockey, basketball and baseball games. And I loved every minute of it. Well, actually, I am still rather confused about field hockey and the weather during those few home matches was just awful. However, I got my first taste of life in athletics!

During my time at Missouri State, I became friends with John, the men’s basketball team manager. A fellow communication major, we had classes together and I got to know him pretty well. About three years after college, while living in St. Louis, I went back home for a wedding. While there, I saw another classmate of ours. During our visit, he mentioned that John was living in St. Louis too and I should get in touch with him.

So I did. We met up for a Cardinals game and I found out John worked at the Missouri Valley Conference. The collegiate conference that includes Missouri State as one of its members. I enjoyed hearing about how he was building a career in athletics. A dream I once had for my own career.

Folks, it was a cool job! I attended games for free, traveled across the midwest representing the conference, met tons of people in the business/sports arena in St. Louis and assisted in sponsoring one of the largest college basketball tournaments in the country. I had to pinch myself sometimes. Still couldn’t make a free throw, but I found myself rubbing shoulders with experts on the field and courtside.

In April 2003, I married the love of my life. Our journey together took us back to his home state of Michigan. I resigned from my position at The Valley. Thanking God for the connections I had made and for making it all possible.

After spending a few months settling in to our new home in a suburb of Detroit, I missed working. I remembered the career I had gotten just a taste of in the three years I worked at The Valley. And wondered, again with no contacts to speak of in the Detroit area, if I could get involved in athletics marketing.

Oakland University was the closest school to our new home. I made a blind call to their athletic marketing director, Mark, to see about volunteer opportunities (smaller collegiate athletic departments welcome good volunteers).

Little did I know at the time, God had been orchestrating things all along the way.

Oakland was new to Division I basketball (sorry if that is lost on you; keep reading for the big picture) and Mark held a new position at the school. The basketball program needed a lot of hands to propel their program into the crazy world that is college basketball, culminating each March in the mad march to the Final Four.

Mark saw value in my experience and that fall, I began volunteering for the marketing department. The following fall, Mark’s intern left to continue on with his own career in sports marketing and I stepped into a paid position.

Over four years time, my responsibilities grew at Oakland. By the end of my time there, just prior to our move to the other side of the state, I was Director of Operations for the men’s and women’s basketball team. A prestigious position, although not all that glorious, which put me inside the inner workings of these teams.

To God be all the glory, I had developed a love for sports in an effort to have something to talk about with my brother!

My only experience playing basketball was in the elementary after-school program. I found no future in it, as I could not stop apologizing every time I bumped elbows with a player from the opposing team. To my knowledge, I never even scored a basket! But God gave me taste after taste of the wide, wide world of sports.

Every year since leaving The Valley, save the one year I traveled with Oakland’s women’s basketball team to its playoffs, I travel back to Arch Madness in St. Louis. I work for the marketing director who replaced me at the conference. I am “gameday coordinator,” which means I oversee everything that happens on the basketball court, except for the actual games.

I work with the bands, the cheer teams, the marketing crew that does promotions on the court, the marketing director, National Anthem singers, various league sponsors, VIP recognition and the list varies game to game. I sit courtside, wear a fancy headphone and boss people around for nine games a year. Basketball heaven! For five days every year, I travel to St. Louis, stay in a downtown hotel - room and meals provided - and work these games.

When I graduated from college, I dreamed of a career in sports public relations. I had no idea how to make that happen. All I really did was sit in the passenger seat and let God take me for a ride. And the fact that I still get to return to St. Louis for Arch Madness every year and perform a job I love, love, love, well that is just plain abundant living.

God created this love of sports in me, and although He without a doubt has other plans for me in ministry, I didn’t have to give up working in athletics. He gave me countless opportunities, amazing memories and the chance to share my faith with a huge contingency of fine people. God works like that!

He wants to do more than just provide for you. He wants to bless yours socks off!

Some March, tune your TV in to CBS one of the first weekends. If you time it right, The Valley’s Arch Madness championship game will be playing live in front of a national audience. And, especially if they pan over to show a coach flipping out over the latest call from a referee, look at the scorer’s table. I’m sitting there, wearing a headset and looking terribly professional. Because God... He’s totally in the business of giving us more than we can ask or imagine!