What God Did With My Sideline Analyst Dream 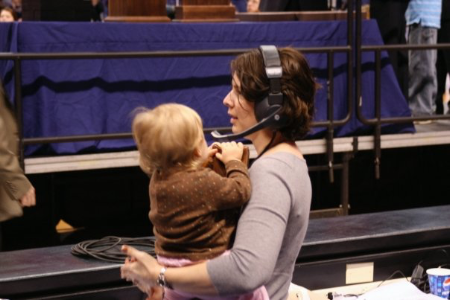 Remember how I told you we do introductions in Bible Study? We give some basic information about ourselves. Then I select a random question, different every time.

Well, on a particular Wednesday evening, the introduction question was “If you could select your dream job, what would you do?” The answers varied as you would imagine. Beth even said she was already doing her dream job - lucky her! I knew my answer right away; my dream job would be a sideline analyst for ESPN. The gal on the field or court who stops the coach at halftime, asking him to give us a rundown on the team’s performance.

I didn’t always like sports. We lived several miles outside of town and my mom didn’t want to make the drive several times a week for us to participate in little league, YMCA ball, etc. As a young child, I didn’t care much anyway. I got even with my mom in high school though; putting hundreds of miles on our car to participate in choir concerts, band performances and theater productions.

Sports came into my life indirectly through my older brother, Tony. We don’t have many similarities; especially growing up in our childhood home. He was the quiet to my loud, the stillness to my non-stop activity, the wallflower to my performances on one stage after another. But I can see traces of God at work in our relationship. He knew we’d need something to bond us over the years.

Tony had one love, well, up to the time he met his wife as a teenager. But his first love - baseball. He collected cards by the thousands. He even kept some of them in the original packaging. When we’d get any extra spending money, Tony always bought a new glove or a baseball or more trading cards. Never shared the gum from these packs of cards either, as I remember it.

He spent hours organizing these baseball cards. His friends collected baseball cards too. They went to baseball card collecting shows together. You get the idea? If I wanted anything to do with my introverted, one-track minded brother, I needed to learn a thing or two about this sport of baseball.

In 1985 or thereabouts, I started paying attention. We grew up near Kansas City, cheering for the Royals. And as God would have it, because I know He’s a big baseball fan too, the Royals won their only World Series right around my 11th birthday. Right around the time I had decided to learn a thing or two about this sport to have at least one thing in common with my brother. Although he still showed very little interest in talking to me regardless.

Something about cheering on a team who goes all the way to win the ultimate prize can get you for life. (Being a Lions fan now, I know this seems an unknown truth to many of my friends and extended family, but next year, next year, we’ll find out for ourselves). I have followed baseball ever since.

About that same time, The Kansas City Chiefs had a pretty good run with a 49ers superstar, Joe Montana. Add professional football to the list of sports I followed.

In the nineties, I headed to college. Three colleges to be exact. My freshman year, I attended Southwest Baptist University. That winter, I needed some side jobs, so I inquired at the school paper. They had an immediate opening for sports editor. Just in time to cover the spring baseball season. Really underqualified, I took the job anyway. I followed every game that year. I reported my heart out and enjoyed getting to know many of the players personally.

The next year, to save money, I chose to live at home and attended North Central Missouri College. Being a commuter, I looked for ways to get involved and make friends on this new campus. The school was starting up a newspaper... God kept putting me in these situations where I got to write and watch sports.

My junior year of college, I transferred to Missouri State University. By now, I had declared my communication major. I took a class, Introduction to Public Relations, or something like that. The professor gave us an assignment to create a press kit promoting an organization on campus doing a particular event, fictional or otherwise. I opted to have the school’s football team host a “Special Olympics” day. This didn’t actually happen but I worked with the Sports Information office to prepare a press kit for the created event.

I got an A on that project and the professor wrote a note beside the letter grade, “Traci, if you can convince the football team to actually do this event, I will personally see to it that you have a job at a public relations firm upon graduation.” Wow! To a small town girl like me, who didn’t have a clue how to break into a field like sports public relations, this offer meant a lot. But I didn’t play sports, didn’t know any of the coaches personally, saw no way to influence the sports arena in any way.

However, you could sure add college athletics to the list of sports that caught my attention.

To conclude part one of this two part post, I borrow two of my favorite words from the Bible: But God....