Where We Go To Church

I admit I am sensitive regarding the topic of church. My faith walk, from the time it was merely awkward baby steps, has the church all over it. I have walked the aisles of various churches thousands of times and knelt at their altars on multiple occasions. I am all too aware of this sensitivity and prepared to defend my position. For let us not forget, although most of Jesus’ ministry was outside the walls of His local temple, He never left His faith. We read of Jesus attending a local synagogue and observing Jewish rituals right up to the night of His betrayal.

That explains why a few months back when I read an article hinting that believers didn’t need to attend church, I could not let it slide. And that is how I met Heather. A lady I have never met in person but I certainly befriended her that day. She too responded to the article and we entered into a conversation.

Exploring this very topic: Where does church fit into the life of a believer?

After friending Heather on Facebook, I have since discovered she hails from New Hampshire. One of those tiny little northeastern states we usually missed on US geography tests. She roots for the Boston Red Sox (if she had been a Yankees fan, we would have probably had to go our separate ways). And Heather doesn’t attend church.

Correction. She didn’t attend my traditional definition of a church. 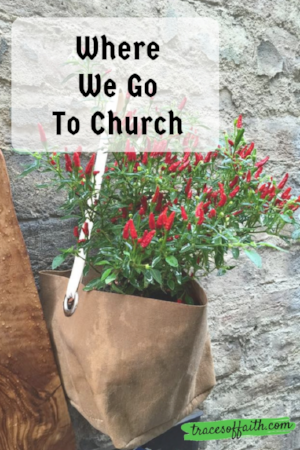 As I discovered, Heather had been a church girl for a long time. Her father served as a pastor for more than 20 years. But somewhere along the way we failed her. Hurt her. You know stories like Heather’s. Maybe your story is Heather’s. Lonely in a crowded church one too many times, so you just stopped attending.

She explained to me how she stays spiritually fed. Heather is a devout follower. I learn so much from the reflections she shares from her time of Bible study. She is an avid reader of Christian books. And she fellowships with other believers.

That part piqued my interest. I wanted to hear more about this fellowship. She explained how she and a small group of people had formed a faith community. They worship and study the Bible together on Sundays. And during the week, they spend time together doing social things. When members of their group become sick, they visit them and often bring food. They celebrate the big moments in life together. Basically, they have formed a spiritual family.

At the conclusion of this discussion with Heather, we landed on a realization. She does go to church! You bet she does. In every way, this group of 10-12 individuals, each at different levels of faith, have formed a church. She knew that and God wanted me to step into that with her.

Her church may not look quite like mine or yours, but read the above paragraph about her faith community again. Then read about the house churches in Acts. It describes a church!

We also discussed the idea of a worldwide church, which all believers form together. I find as my faith grows, my interest in this worldwide group becomes stronger. My desire to pray for those around the world and to help however I can, it deepens. Hers does too. But still there is this need for a local body of believers. We both see that.

I read an article recently about a new trend of churches that meet in bars. Part of their fellowship hour is spent trying out local craft beers while discussing Scripture. Setting aside our opinions on that approach, I will say there is probably a group of individuals being reached through these unique church gatherings whom other churches do not reach.

To quote Mark Batterson, “There are ways of doing church that no one has thought of yet.”

I follow the wanderings of the 20-something generation. Many of those who grew up in church left and have yet to find their way back. I know this isn’t entirely uncommon for those experiencing college life, on their own for the first time. What I pray about, what I hope for, is that we ultimately offer them a church they are ready to lead someday. That we can meet their needs while still holding to the truth that

Jesus Christ is the same yesterday, today and forever (Hebrews 13:8).

Finally, I trace the fact that God has placed me in an unusual number of churches and denominations over my years. I have been a member/regular attendee of nine different churches representing four different denominations. Mega churches, small country churches, city churches. I have seen a lot. Still God whispers to my heart, “love the church.” Because He does. His Son does. So, whatever your local gathering looks like...

Let us not give up meeting together, as some are in the habit of doing, but let us encourage one another - and all the more as you see the day approaching. (Hebrews 10:25)

We've actually begun attending a traditional church again. It's very small... but the Lord really touched my heart on this topic as I watched my 13 year old son being influenced by his peers. We knew we needed to give him an environment where he would have people his own age with strong faith.

We also felt that we weren't "giving" as much as we needed. We had gifts that weren't being exercised in our home church, and after much prayer, we decided to make a change. The Holy Spirit is a wonderful teacher.

God has a season for everything. He had a purpose in pulling our family away. It gave us time to heal, and also perspective on what we were missing by not being part of a larger fellowship.

Now, He's calling us to something else.... it's a growing process really. It means trusting Him and being willing to be vulnerable... taking a risk and perhaps even being hurt again.

BUT... He called us to the perfect place. A small church (seriously smaller than we were used to - one without a lot of "programs") in which we can grow and really experience life as a family of believers. One with a Pastor who is excited about redemption and gets it. There is another family we're friends with who began attending around the same time. It's kind of like a rebirth for all of us.