Is your sweater shedding or is that pet fur?

I should have listened to my brother. I mean, not all the time, because he’s a little crazy and delights in getting me in trouble with mom. Still.

We had a dozen cats and dogs in as many years. Without a fenced-in yard or kennels, they just lived on our property. Only a few times do I remember those pets coming inside.

Spike did. I guess because he was a puppy? Or mom wasn’t home? We got to playing and he chased me in circles around our house. Well, it got too intense and I ended up on the couch, freaking out, squealing for him to stop.

Another time, I talked mom into letting me have a pregnant mama cat in my bedroom. Just until she gave birth to the babies. She. And the babies. Had fleas. It was a bad experience. 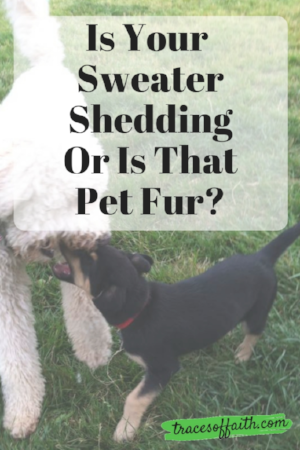 So, our pets just lived outside. They stayed relatively close, had a pole barn to take shelter in during the cold months. Other than coyotes, neighbor dogs and vehicles going too fast on our gravel road, the survival rate seemed rather high. We were always sad to see pets go, but understood it to be the way of things.

About two years after I married Ryan, we got our first puppy. Red Dog. And the first thing my brother said when I told him our happy news was, “You shouldn’t let him be an inside dog.” And he reiterated his sentiments with Blue Dog, Cashew, Porter and the Tom Cats.

All these years later, I wonder if my brother wasn't right.

And here are the reasons why:

Pet hair. Everywhere. In our new house, we opted to get concrete floors. A brilliant move for many reasons. However, I now know how much fur our pets really deposit on a daily basis.

You form a much greater bond with indoor pets. Thus, the grieving process sucks. We lost Red and Blue within months of each other. The memories always come flooding back as we did little things around the house. The worst was the quietness in the house when I came home. Nobody greets you like a dog.

Toddlers have nothing on a dog. The minute you sit down to do something, or start dinner, or get on the phone, they need to go outside. Or they get to playing together. Which is kind of like a cross between a herd of elephants stampeding and a pack of hyenas tearing apart their dinner.

My mother has gotten so used to me yelling at the dogs when we are on the phone that she knows to stop in mid-sentence when I start in on them. My conversations sound like a person diagnosed with Tourette Syndrome. How is your...“Drop it!” morning going... “You can go outside in a minute.” so far? “Release.” “Baaah!”

I am OK with having an only child. She’s well adjusted and we do a good job entertaining one another. But I cannot handle an only dog. Seems so lonely. Now, we have Cashew and Porter. Both weighing in at about 65 pounds. Fighting in my living room; ramming into the furniture, knocking off coasters and glasses and phones. Onto our fashionable, practically practical concrete floors.

Recently, we stopped kenneling our pets at night. Which actually means we spend portions of every night kicking them off the bed, telling them to stop barking at the window, shooing them out of Allie’s room before they wake her up. And, after just a week of testing the theory, I discovered Cashew will still chew up the bathroom rugs if left alone long enough.

But here we are. With these lovable creatures taking over (er, I mean living in), our house. I wouldn’t change it. Some people long for more baby time. I melt when I see a puppy. I’d take them all home with me if I could. Against my brother’s better judgment.