God knew. I can trace Him at work in our friendship ever since our first day on that small college campus.

Many of us have experienced that moment. When you find yourselves hundreds, maybe thousands, of miles from home. For the first time. On a college campus. And you don’t know a single soul.

That’s the day I met April. Amidst our “Welcome Family,” that first week, she emerged as a forever friend.

Some of our best friends are made in college. Perhaps because the only common ground exists exclusively between us. We don’t know one another’s family. We don’t share a home town and its thousand memories.

We make new memories. Together.

I only attended that small Christian college for one year. Financially, it made more sense for me to spend my sophomore year at home.

But I kept my college friend, April. Really, she wouldn’t have it any other way. She’s better at that than I am. Several times a month, she would write me with updates and ask how I was doing. She visited. We talked on the phone.

The next year, I started attending a state college close to where April was still going to school. And again, she proved herself a faithful friend. We would spend weekends together. She was the loud to my quiet. The crazy to my calm. So much different. But we shared a love for Jesus and for our friendship.

After college graduation, I made the move to St. Louis. One of my very favorite cities. Upon graduation, April moved back to the town of her youth. St. Louis. For a time, April and I became roommates.

We took turns dissing the boys who broke up with us. Went on more than a few one-date wonders. Shared loads of secrets. Attended church and Bible study together. There wasn’t any part of life that was off limits.

In those years, we started to get on each other’s nerves. It can be hard to know the inner workings that dictate the actions of a close friend. We were often inseparable. And the friendship slowly slipped into a sisterhood.

And I’d never had that before.

The friend you could share a meal with on the holidays. Just as easily as you do with your flesh and blood family.

She introduced me to my husband. Actually, I should more appropriately say, she pushed my husband and I into our first couple dates and fortunately we came to agree that was a good idea indeed.

On my wedding day, she and her boyfriend helped decorate the country church where we held the ceremony. On his birthday. She stood tall and proud as bridesmaid #3.

Just over a year later, I returned the favor. Bridesmaid #6 in her own wedding. On Lake Michigan’s shoreline.

And therein is the heart of our story.

April and I have spent very few years actually living in the same town. Our friendship survives over many miles. And God knew this would be so. 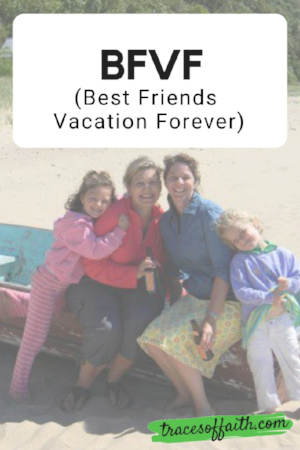 Traci married Ryan. A Michigan native. And I followed him here from Missouri. Gladly.

April married Tom. A Missouri native, whose family has owned a lakehouse in Michigan for generations. And they vacation here multiple times a year. Gladly.

Even though we live miles away from one another, we see each other quite often.

I work the basketball tournament in St. Louis each March. Tom and April visit Michigan a handful of times each year.

We both have one daughter. They are a few years apart. But BFFs before my daughter could even get those letters right, let alone know what they meant.

It must be in the genes because every time our girls get together, they pick up right where they left off. Like mothers, like daughters.

Still we can get on each other’s nerves. I am not much into talking on the phone, while April thinks we should talk daily just to catch up. Apart, we decide to eat healthy, until we get together and declare our healthy eating officially on vacation. No one but a friend like a sister can tell you the hard, honest truth during those times you’re getting it wrong.

We plan to see each other a few times this summer. Like always. When I think vacation, April and her family are never far from my mind.

Tracing God’s faithfulness. With my forever friend. From Missouri to Michigan.