When feminism has a name

I’m no good at answering the question, who is your favorite Bible character? Can I have 37 favorites? Or none save Jesus. All the others are so... flawed.

There is a lady in Scripture, however, who inspires me. When I first started speaking and teaching, my mom sent me a bracelet with a single charm on it. As a reminder of this story. I think of this woman often.

She remains unnamed. Luke is the only gospel writer who shares her story. If you aren’t careful, you’ll probably overlook her altogether. It would seem those in her day certainly did.

As recorded, Jesus looked up from his seat at the temple. Because, you know, Jesus went to church.

He watched the rich put their gifts into the temple treasury. Can’t you see them? Making a show of lugging their heavy gifts to the containers. Struggling to lift their bags of money from the sheer weight of the loot. I bet they dropped those dozens of coins in one by one. Clink. Clink.

Then, she came along. I hope to learn her name in Heaven someday. Because I think her name is important.

A poor widow came and put in two very small copper coins. A tiny offering. Meager. A toddler could have carried the weight of her offering. 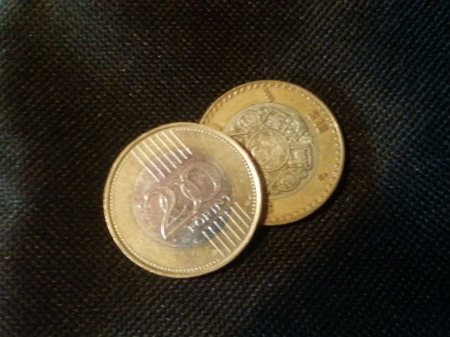 But Jesus. He was impressed. And that is all that matters.

“I tell you the truth... this poor widow has put in more than all the others. All these people gave their gifts out of their wealth; but she out of her poverty put in all she had to live on.” Luke 21:3-4.

I, for one, am starting to pay attention. I’m moving past the connotation feminism carries in my mind. A definition learned from a young age in my very sheltered world.

Kind of like the term “poor widow.” A lady in Jesus’ day who lived in poverty and had no means to improve her lot in life. A woman who others in her day wouldn’t have noticed in their very sheltered world.

Yet, Jesus praised her. Forget winning an Oscar. Or having a blog post go viral. She earned a mention in the Bible!

That takes me back to the idea of a favorite Bible character. If I were to ask you for the name of a favorite, some would say Moses, Ruth, Esther, Peter, Abigail. Some of you brave souls would even claim Paul.

But very few, if any, would claim a poor widow as their favorite.

I wonder if it would help her cause if we knew her name. If Luke had embellished a bit more on her story. If she’d been in need of a physical healing and Jesus provided a miracle.

Which also makes me think maybe we’d warm up to this idea of Christian feminism a bit more if we saw the label through a different lens.

Then, when writers like Rachel Held Evans have the nerve to get all up in our business. And she says:

And she dares to write posts like this one, We Need Feminism. In no uncertain terms, she tells us we can do better. No more wrinkling up our noses at those who dare to use the word “feminist.”

No more ignoring the poor widow, who put in all she had.

And we acknowledge women. Victimized women. Overlooked women. They have names. Jesus knows them every one. By name.

And you. And me. And Rachel. American Christians who have so much to give. He wants us to give all we have.

To the woman who has experienced domestic violence. To the woman caught up in the nightmare that is sex trafficking. To the young girls (sitting on the pews in our church) who already think they are not thin enough. To women who are sexually assaulted. The women who don't live into the full calling God has placed on their lives because it might break a mold.

I don’t know exactly how God’s justice system works. Oh, I hurt. I have struggles. But overall, mine is a life of privilege.

This week, though, I have determined to learn just one name. One name of a woman I can pray for. One name I can support in whatever way God leads.

Together, let's be inspired by an unnamed poor widow who impressed Jesus all those years ago. Let's give all we have.