Faith as a Family Tradition

I have never left the church. Perhaps I should say the church never left me. It runs through my veins on my mother’s side.

In my earliest memories, of a granny who took a monthly portion of what little she had and financially supported Billy Graham. Living into her 90s, she always kept a devotional guide and a Bible on the end table by her chair. A simple faith that grew stronger with age. One she shared with those around her. She attended a country Christian church until she became unable to do so.

To a grandma who had little money and many mouths to feed. She mourned more deaths than anyone should. Three children lost in separate car accidents (two were teenagers, one late twenties). Also a husband who lost his fight with Alzheimer’s Disease before the illness had really developed a name for itself. Her quiet faith was business conducted between her and God. But we all saw it. Felt it. She attended a local methodist church until she moved to town. Later, she attended a baptist church with her daughters.

To her husband, my granddad, whose own grandfather was a preacher. He became riddled with a disease that took over his mind. Through all his days, he never lost his faith. Some days, he didn’t know his own family. One time in particular, we had a big family dinner at their house. He leaned in close to us as if sharing some conspiracy theory.

And he said of my grandma, "I don’t know who that woman in the kitchen is but she’s been working hard all day.”

That man lost touch with the present on a regular basis. Wandering off to mend fences no longer in the fields. Wanting to leave the nursing home where he spent his final days so he could just get back home. But if you sat him down at the piano, he never forgot a single note or a single word from the hymns of his church:

“Farther along we’ll know all about it,

Farther along we’ll understand why;

Cheer up, my brother, live in the sunshine,

We’ll understand it all by and by.”

To a mother who married young. Wed a wild teenager. They had three children together and raised them well. Before life and hurt and problems became more than they could handle together. As an adult, I experienced my parents’ divorce from a distance. I saw my greatest mentor fight for her sanity as she lost the love of her life. I witnessed the turmoil that came with choosing divorce when she knew it wasn’t what God had planned for an ideal marriage. Yet, she reached a point where it became obvious her marriage was less than ideal. 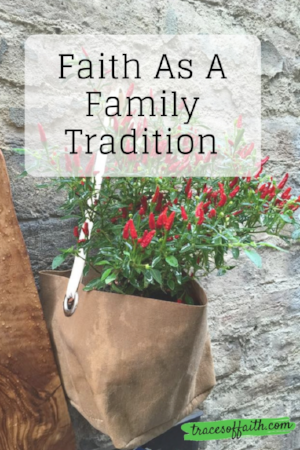 She clung to her faith. I watched her read through the Psalms repeatedly until they finally penetrated her soul and brought healing. When nothing else could. After all those years of attending church alone with her children, she sought refuge in the Scriptures she had discovered there.

With time, she transformed from fragile and broken to a strong leader in her church. Talk to her today and she’ll give God all the glory. Always in all ways.

So, when it came time for me to leave home and find my own faith, I knew right where to look. Not in a single church (I have faithfully attended nine in six different cities over the years) or in a single denomination (four at last count). The church was in me. In my blood. In Christ’s blood.

All I had to do was find a community of believers who would walk my faith journey with me. As my people had. I don’t look for the church to be perfect or to have the exact same belief system I do. What I do look for is a Bible-teaching pastor. I need a loving family (because mine live so far away) to walk life with me. I want to work out my salvation with fear and trembling (Philippians 2:12b) among believers who are also doing the thing. In varying degrees, the church has always fulfilled these needs in my life.

Whether by sprinkling or immersion, infant or adult, may my family always be baptized with the holy waters found in the local church.

Generations of my family before me found answers to life’s hardest questions at church. Honestly, if I didn’t stay in the church, keep my faith, I wouldn’t have the first clue where else to look.