Tables in the Wilderness - A Book Review

I received a copy of  "Tables in the Wilderness: A Memoir of God Found , Lost & Found Again" written by Preston Yancey, from NetGalley for the purpose of generating a review. Italicized quotes are from the book. The opinions expressed here are my own. 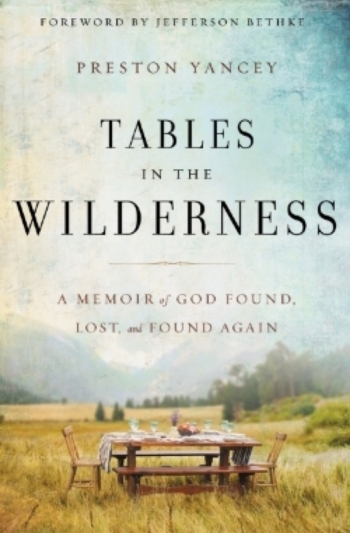 Don’t judge a book by its cover.

I know. I know. But look at the cover. It’s beautiful!

I’ve read some of Preston Yancey’s thoughts on his blog and twitter these past few months. When I learned he was Southern Baptist turned other, like me, I knew I wanted to read more.

Life took me away from my Southern Baptist roots (Michigan-Northern and Baptist-Southern are a hard match). For Preston, he branched off from his roots while attending a Baptist college.

“I was raised Southern Baptist and had stumbled into the Episcopal church on the Feast of Saint Francis my sophomore year at Baylor University and had been living in a two-church - one Baptist, one Episcopalian - Sunday-morning model ever since.”

His memoir takes us on this journey in great detail. He didn’t set out looking for different. But he reached a point in his life where he was no longer hearing God in the sameness he’d always known. He walked his college years in the wilderness.

Preston knew God hadn’t left. He just wanted to fellowship deeply with Him again. To break the silence.

“Silence in the Baptist church meant you were waiting for God to respond, and in the meantime you were supposed to keep praying and reading the Bible; silence in the Episcopal church meant the same thing; they were just kind enough to write down a few prayers to help see you through.”

“What I study in school, what I blog about, what I spend nearly every ordinary conversation somehow addressing all has to do with, specifically, relating the whole of a person and our lives to God.”

And you learn beside him. You’ll walk away from your time in this book with a whole list of other books to read. He’ll explain the importance of written prayers in his faith walk. He identifies many occurrences in his life based on the church calendar year. He sees the beauty in many denominations.

“If the Baptists do not have a prayer book, they have a hymnal, and that hymnal is its own sort of liturgy, its own sort of teaching a vocabulary of prayer and habit of being.”

“For a long time after I first began attending St. Paul’s I carried the word Eucharist around like it was a weapon. Anytime I was with anyone, I saw fit to forgo other words like Communion or Lord’s Supper in favor of the ‘right’ word for the event... I had missed the point of the Eucharist entirely by obsessing over how to name it... If we get tripped up by the words about God, we miss God in the process.”

I adored the book. I knew I would. Our journeys have similarities. Perhaps my favorite part is where he landed. He now sits at the Faith Table and serves up big portions of grace. To those who love God but might do so a bit differently.

“But grace comes into the cracked places, and one day I said Communion and meant it, profoundly, as much as I would have meant Eucharist. It was about that time I became comfortable again with the word evangelical too.”