Who Your Friends Are

I have a mommy friend who challenges my thinking every time we visit. She doesn’t do this intentionally. She’s comfortable sharing her opinions and often she’s given more thought to a topic than I have.

We found ourselves at McDonalds Playland once. Don’t judge. (If it makes you feel better, tell yourself we threw away the play clothes after and then immediately threw our children in the bathtub.)

Anyway, we got on the topic of homeschooling. She does. I pray I never have to. She had researched area co-ops to see where they might want to get involved. It bothered her when she discovered many of the groups required a statement of belief before considering an application.

She wondered, as Christians, if this was too exclusive when it could potentially be an opportunity for outreach. A service to the communities where we live.

What I want to write about today is where this conversation ultimately took us. We started talking about the various people who could be reached by a homeschool co-op. And she admitted something to me:

This blew my mind. I have so much respect for this friend of mine. I consider her a great thinker. I have never caught her making a statement she can’t support with a well-thought-out answer. I asked her about this once. How is it she became such a critical thinker?

She knew right away. Growing up, when she’d gone to her father, a pastor, for an answer about something she’d had on her mind, he never just gave her an answer. They talked it through. He might have her look up the answer herself or find Scripture addressing it.

If there was anyone who could effectively share her faith, my friend could do so. Nonbelievers needed her as a friend!

But often times, this seems to be the case. Christians befriend Christians. We get so immersed in our church bubbles, we don’t even know anyone who isn’t a believer. Let alone forge friendships.

Let’s take this thought one step further. Inside our church. To do so, I’ll introduce you to my good friend, Cody. She became my sister in Christ five years ago at a Monday morning Bible study. I wasn’t there that day. Someone else prayed with Cody as she asked Jesus to be her Lord and Savior. Not just a God she’d heard about somewhere. Her God.

But I do have the privilege of walking this faith journey with Cody now. She has attended our Wednesday night Bible study for years.

One time in particular, Cody shared a part of her story in response to a study question. It started off something like,

Cody and I are different. But we’re sisters. Family of God. We have created a bond where we can safely be ourselves. Believe me when I say Cody doesn’t really worry about what she says in Bible study anymore. 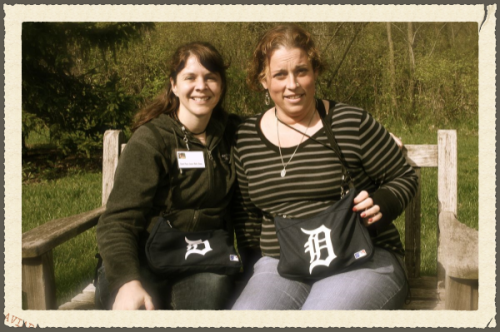 She’s also my friend. We have so much in common. We both raise farm animals. Our daughters enjoy playing together. We have many of the same friends. We like to cook.

I often wonder who Jesus wants us to be friends with in our lives. I mean, really f-r-i-e-n-d-s. We’re good at mission trips and coat drives and collecting food and filling shoeboxes with toys. And we should be! The question that won’t leave me is this:

Do you have friends who aren’t, for all intents and purposes, just like you?

There’s another person I can blame for all this thinking. Sara Miles. I’m reading her book, Take This Bread: A Radical Conversion. She’s radically different from me. But we are sisters. In Christ. Her book challenges me.

With every page, I keep hearing this little voice asking the question,

“She's a church girl too. Would she like you?”

In the flesh, probably not. Without a doubt, I know she’d make me nervous. We have completely different lifestyles and backgrounds. But I also know, because I believe in the power of Jesus, we could find our common ground. We could serve our Savior side by side.

She knows this too. Read what she’s discovered:

[I realized something] listening to Christ’s voice in other churches, through the middle-aged woman with the annoying nasal whine, and the self-righteous homophobic radio evangelist, and the conservative African bishop. I was not going to get to sit by myself and think loftily about how much Jesus loved me in particular. I was not going to get to have dinner, eternally, with people just like me. I was going to get communion, whether I wanted it or not, with people I didn’t necessarily like. People I didn’t choose... the people God chose for me.