I received a copy of  "Capturing Jasmina" written by Kimberly Rae, from NetGalley for the purpose of generating a review. Italicized quotes are from the book. The opinions expressed here are my own. 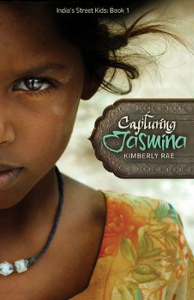 There are parts of this world that don’t fit in mine. Horrors I cannot fathom. We all know it. But few rarely talk about it.

“You are a girl” was all the answer I got.

Thus goes the conversation a little girl from India had with her parents growing up. Jasmina always took second place to her brother, Samir. He was, after all, a boy. A son could grow up to learn the family trade and help financially.

Now I know we have unloved children here in America. Orphans in every sense of the term. But what leaves me rattled as I read about the children in India is that the disregard for them seems normal. A way of life I cannot understand.

This work of young adult fiction didn’t seem fictional. It read all too real.

Jasmina and her brother, Samir were sold to a man offering their father a “good education” for his children. Every adult involved knew this promise for schooling was a lie. Every adult made a choice to follow through with the transaction anyway.

That’s how the two children found themselves working in a factory with no windows. Not sex trafficking. Yet. Labor trafficking. Slave labor. Making clothing for Americans.

Jasmina’s story unfolds in the form of a letter her guardians encouraged to write to her brother after she’d been rescued from this terrible life.

Before her rescue, Jasmina spent years working. Starting at age ten in the merchandise factory. Then a rock quarry. Threats kept these children working. The owners told the children they would go after their families if they tried to escape from their working conditions. The very families who put them in the situation in the first place.

So the children stayed. It was the third time of Jasmina being sold as a business transaction that she took a chance and escaped. She was around 15 by this point and had noticed men started looking at her differently.

On the way to her third “job,” she jumped out of the car at a red light and ran for her life. She decided living a life on the streets was better than working at whatever job was waiting for her at the end of the car ride.

“Labor trafficking is only half of this business. The other side is much worse.”

“Worse? How could anything be worse than slaving away in a factory or in a rock quarry? What to you mean?”

“What they will sell is not our labor but our bodies....”

Jasmina was, in her own way, a fortunate one. She managed to maintain her hope and her will to fight. Ultimately, she met a group of Christian ladies from a rescue mission. For the first time, Jasmina heard about Jesus. A God who hates the evil sin behind trafficking of any sort.

As I said, it’s more than I like to think about most days. A lot for me to wrap my mind around as their world seems so different.

But as believers, I’m convinced we can’t hide behind the luxury of ignorance. This book, and its follow-up, Buying Samir, educate us on the realities of our spending. We need to be mindful of what products we buy and where they are produced.

If I ever meet a real-life Jasmina, I’m not sure I could even look her in the eye. I would do it so she could know she has value. But shame on me for not doing more to make a difference.