What We (Ultimately) Did With The Easter Bunny

I was one of those moms. After discussing it with my husband, we made some rather radical decisions.

We kicked Santa Claus, the Easter Bunny and the Tooth Fairy out of our house before they even had a chance to unpack their bags of tricks. We decided our daughter would not grow up believing in these legends.

A couple reasons for this decision. We wanted to place a high value on truth in our household. Always. Also, in consideration of our daughter's developing faith, we intended to celebrate the real reason for every season. Unsure about where that would lead us with the tooth fairy, but...

I know the arguments. I’ve read many articles on the topic. It’s all just for fun. Right?

Well, after parents make a decision like we did, the execution of your best-laid plans can be the greatest challenges. Holiday movies caused a big hiccup.

Instead of telling our daughter Santa didn’t exist, I told her the actual story behind the legend. That Saint Nicholas lived a long time ago and brought little kids gifts. Brilliant, right? She wouldn’t burst her peers’ bubble with the knowledge that Santa was a big, jolly ole fake.

This tactic blew up one night when visiting our friends in their home. Maybe you saw this one coming. I didn’t. The two kids ended up discussing Santa Claus. And our daughter, in all her wisdom, began shouting at the top of her lungs,

You get the idea.

That was Santa. I thought the tooth fairy would be so much easier. He only flies into the picture a few times anyway, right? Our dentist has a sweet book about the various traditions kids have around the world when they lose a tooth. We read it every six months.

I told Allie we could just celebrate a different tradition with each tooth she loses. One time, we could throw her tooth on the roof like the children in Greece. Or bury it in the ground like they do in Malaysia. No way. When she caught wind of the tooth fairy leaving behind actual money, it was a deal breaker. She wanted in on that tradition.

That brings me to the Easter bunny. She was around two when our intentions got challenged with this one. There was an Egg Hunt at the local park. I’d decided to call them Spring Eggs. That way we could decorate them and hunt for them without tying them to the religious holiday of Easter. 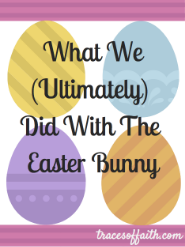 Except, “Spring Eggs” always sounded so weird. Was that what this all was? Weird? And at this egg hunt, the Easter Bunny was scheduled to make an appearance. Was I planning to pick her up and run like a mad woman when she noticed him? Deny there was a six foot creature hopping along beside her wondering if she wanted a photo opp? No. We just stopped, posed for a picture and captured the adorable moment. Period. 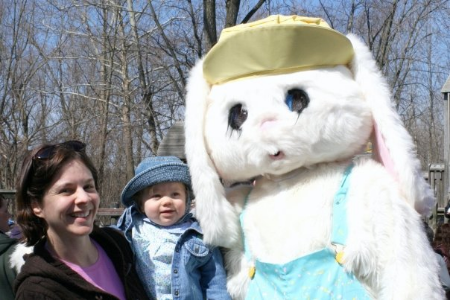 If you’re keeping track, I’m zero for three on protecting my wee one from these childhood legends. I’ve had to rethink our approach in every instance.

So, in a nutshell, here are my adjustments. I don’t discuss these lovely three unless she brings them up. She’s never received a gift from Santa and we’ve discussed that it might be inappropriate to go around telling her friends he’s dead.

Her teeth seem to be holding on for dear life inside her mouth so she’s yet to lose a tooth. We’ll tackle that one when we actually need to.

As for the Easter festivities, she’s never gotten an Easter basket either. I buy some candy and she usually gets a gift. Because I’m the mom and I can give her a gift whenever I want. (sigh) Again, we just don’t make a big deal out of the bunny. He’s really not in our little world. We do decorate eggs and I simply refuse to call them anything. Just color the egg kid.

You’re probably shaking your head at me by now. I know I can have a tendency to go a bit too far. But I take this faith thing, like, really seriously. Instead of refusing to acknowledge these legends, we just reshifted our focus. That’s my solution.

At Christmas, we participate in Advent by piecing together the Christmas Story each day. Directly from the Bible. We sing Happy Birthday Jesus on Christmas morning. Other elements of our faith are woven in as appropriate.

Easter. We discuss Holy Week. What did Jesus do each day starting with Palm Sunday? This summer, we visited Cross in the Woods, which had the Stations of the Cross set along a nature path. We started learning about this tradition as well. We’ve done Resurrection Eggs.

We have several children’s books explaining the true meaning of the holidays. This Easter, might I suggest you look at including one of these in your child’s Easter, er, I mean Spring, (er, no, I don’t) baskets? Whatever you decide to do with Santa, the Tooth Fairy and the Easter Bunny, please make sure Jesus remains at the center. Think the holidays through.