At The Water's Edge - A Book Review

I received a copy of  At The Water's Edge, written by Sara Gruen, from NetGalley for the purpose of generating a review. The opinions expressed here are my own. 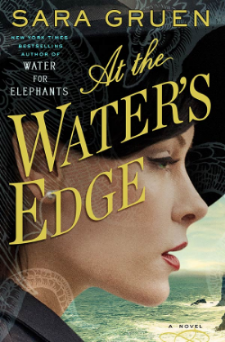 I get so excited when I meet a fellow bookworm. There’s a certain twinkle in their eye when books are discussed. I’ve seen them buried in a book at restaurants, riding in a car, while waiting for church to start.

Once I visited with a friend of mine who fits this description. An avid reader. I told her about a historical fiction book I was reading about Marie Antoinette.

Right away, she cut me off. Oh, I don’t read books like that. I can’t stomach all the entitlement. Her opinion offered me a perspective I hadn’t considered.

When I picked up “At the Water’s Edge,” my friend’s words rang truer than ever. Written by Sara Gruen, author of “Water for Elephants.” The main characters in her latest novel - Maddie, Ellis and Hank - reeked of wealth and privilege.

But life has a way of taking this away. Or at the very least, opening your eyes to a greater reality.

The reality bug bit Maddie first. After this trio decided, rather haphazardly, to go track down the Loch Ness monster in Scotland during World War II, one would wonder what exactly they did expect?

First, they encounter wounded soldiers on the boat. Neither of Maddie’s travel companions were eligible for the war. They didn’t seem phased one bit by images that would haunt Maddie for a long time afterwards.

Upon arriving at the lodge where they would stay during the entirety of their trip, the reality of war continued to stare them in the face. Air raids, gas masks, food rationing. Again, Ellis and Hank didn’t seem to notice. More and more, Maddie finds the reality undeniable. It changes not only her thinking, but ultimately her whole life.

Ms. Gruen can tell a story. She’s also proven to be an excellent researcher, placing her readers fully in the Scottish Highlands during World War II.

My bookworm friend, she might be able to stomach this novel. Ultimately, Maddie realizes there’s a whole lot more to life than fancy parties and unlimited cocktails.