I received a copy of "Runaway Radical: When Doing Good Goes Wrong," by Amy Hollingsworth and Jonathan Hollingsworth, from Family Christian Stores for the purpose of generating a review. Italicized quotes are from the book. The opinions expressed here are my own.

And great news! Family Christian has offered to give away THREE copies of this book to some of my readers. You may enter to win a copy at the end of this article. 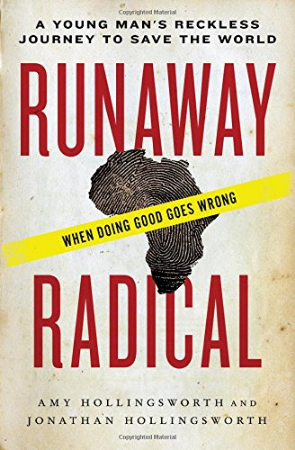 Perhaps you’ve heard the phrase, “Recovering Pharisee.” I’ve used it myself. For the individual (like me at times) trying to quit being so legalistic in his or her faith walk.

What it means for me, when I use the term, is that I’m done following a set of rules. That list of do’s and don’ts I created in order to ensure Jesus would love me.

Because following a rulebook to the letter can’t make Him love me any more than He already does.

In the book, “Runaway Radical: When Doing Good Goes Wrong,” Jonathan Hollingsworth and his mother tell their very personal story about a different form of legalism.

The radical call to do good is how legalism gets to young people who couldn’t be tricked any other way. It’s the gateway to my generation, Jonathan said. What we are talking about is an ancient evil, not a new fad with a shelf life of a couple of years. Legalism doesn’t fade; it just reinvents itself. I only carried the ideals of the radical movement to their logical conclusion, followed legalism to its only end. And it always ends in some kind of ruin. It always ends in despair.

This is a lesson Jonathan learned the hard way. Jonathan grew up in a Christian home. A member of a generation hungry for social justice. They see through fake and long for ways to genuinely serve God and others. According to Jonathan,

My biggest fear is that I will fail to give God the glory he is due.

After spending a while in college, Jonathan decided to do some mission work before continuing his pursuit of a degree. He spent time first in Honduras, then prepared to spend a year in Africa.

This book tells the horrifying story of what happened to him in Africa. Going on this mission trip seemed the natural next step to a lifestyle Jonathan had been embracing. In the words of his mother:

Jonathan began to pray that God would pass him over, would allot his blessings to others. He said that the first twenty years of his life had been so blessed that he could be miserable for the rest of his life and still be grateful.

He got rid of practically everything he owned. At home, he slept in his closet after getting rid of his bed. He journaled on his closet wall; references to Scripture, quotes from saints and books he’d been reading.

His first few months in Cameroon seemed to go well. He made good contacts and had the freedom to do work he found satisfying. He regularly communicated with his family.

After a while though, what he couldn’t tell his family because he was so closely monitored, was how restrictive his life had become. A long list of dos and don’ts kept him under a house arrest of sorts. Thousands of miles away from home.

Finally, his parents were able to piece together the SOS their son kept trying to send. What started out as a mission trip to do good had turned into a nightmare. His mother writes:

Desperate to get Jonathan out of Africa, we considered every possibility; Do we get the State Department involved? Do we fly to Cameroon ourselves? A church offered to buy Jonathan a new ticket. A pastor friend offered to fly over and retrieve him under the cover of night. Finally Jonathan’s church, where he served as youth leader, stepped in and secured his release home.

I kept asking myself, “How did this normal Christian family end up having to consider these questions? Is this what Jesus meant by take up your cross and follow me?”

After Jonathan returned from his mission trip to Africa, he had to put his life back together somehow. He needed to cogitate what had actually happened to him. He had to figure out what to do next with his life. Obviously his purpose, his faith, had been redefined.

This book was part of that process. Even though it was difficult and brought up things neither mother nor son wanted to face, it helped them process all they’d lived through.

Near the end of the book, Jonathan shares this discovery,

What Jonathan ultimately realized is what every recovering Pharisee needs to realize.

If it was legalism that shut me out, it was grace that snuck me in.