When The Diamonds Were Gone - a Book Review

I received a copy of When the Diamonds Were Gone: A Jewish Refugee Comes of Age In America in the 1940's, written by Julian Padowicz, from NetGalley for the purpose of generating a review. This book came out earlier this month! Italicized quotes are from the book. The opinions expressed here are my own. 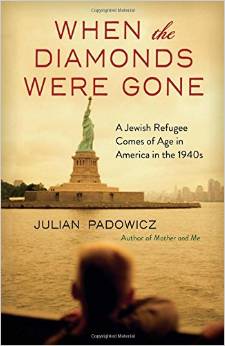 Have you ever wondered how your kids would turn out if you didn’t do the 9,318,215 things you do as a parent every day?

The memoir When The Diamonds Were Gone, by Julian Padowicz, inadvertently explores this question.

A little Polish boy who fled his native country with his mother in World War II, he had to leave behind his beloved nanny, Kiki. He’d search for a place to call home again for most of his life.

Upon arriving in America, he thought there might be a chance at normal. His mother enrolled him in a nearby private school. He made friends with kids his own age and started to feel settled.

For the first time in my life, I felt almost like a regular kid.

The illusion was short-lived however. In large part due to a mother who always seemed to have her own agenda and the fact that Julian got shuffled to various family members and boarding schools his whole life, regular wasn’t in the cards for him.

Looking back, Julian shares with his readers how inadequate it made him feel to never have a real home. He tells story after story of how his mother just sent him on his way.

For example, while attending Rumsey Boarding School, his mother checked in on him via a phone call:

Pierre [her new husband] and I are at the airport... We are flying to Lima in Peru. Pierre has been attached to the embassy there. Aunt Julia will come to your graduation dance. You’ll go stay with them till I send for you. Obey everything she says. Oh, and where do I have to send the check for your next school?

The school Julian realized he’d be responsible for selecting.

What amazed me as I read this memoir is the fact that Julian didn’t grow up thinking this mother/son relationship was abnormal. If anything, from a young age he shouldered the blame for the lack of connection.

That I was a burden to my mother-one that she so heroically shouldered-had been pointed out to me by many of her friends and relatives, and it did not enter my mind that I should be seen as anything else. Had I had more exposure to the family life of other boys I would not have been so tolerant.

Julian didn’t so much as thrive in his childhood and college years as he survived them. He did share many happy stories of times with friends, family and coworkers. But the elephant in the room seemed to always be the lack of nurturing from his mother.

This truth left a hole in him that he would try again and again to fill. He married in his 20’s, thankful that:

For the first time since I was seven years old, I had a place I could call home.

But after 23 years and raising three daughters together, the marriage faced more challenges than the couple could overcome. The couple got a divorce.

Now, in his 60’s and remarried, Julian finally identified some conditions that further affected his terrible self-image. He’s been diagnosed with ADD and dyslexia. Treatment for these conditions would have been limited at best in the 1940’s but one can’t help but wonder what progress he could have made with more attentive parenting.

When the Diamonds Were Gone is not a happy read. It’s interesting and you celebrate the successes that Julian experiences throughout his life. But for me, there’s a lesson there. All the little things we do as parents. The attention to all the details that make up our child. These things matter.