Lessons Learned From a Neighbor

I have a request I’m saving for someday when I walk the golden streets of Heaven. I want to take a nice, long walk with my neighbor, Karen. We don’t have to go anywhere in particular. Just a stroll taking in the sights and smells of our surroundings.

Because, you see, we can’t do that now. Karen had cancer as a teenager and she lost a leg. She’s tried different prosthetic legs in the past but her body doesn’t take to these very well. So these days, she alternates between crutches, a wheelchair and electric scooters.

Last winter, Karen fell and did damage to her rotator cuff. She had shoulder surgery and you can imagine the difficulty this has caused in her mobility. She’s slowly improving, but the slow part can be frustrating.

When I take a walk along our dirt road, I often think how nice it would be to have her join me. Maybe we should just drive our golf carts side by side instead and visit that way. Until the day Jesus comes to make all things new and right. 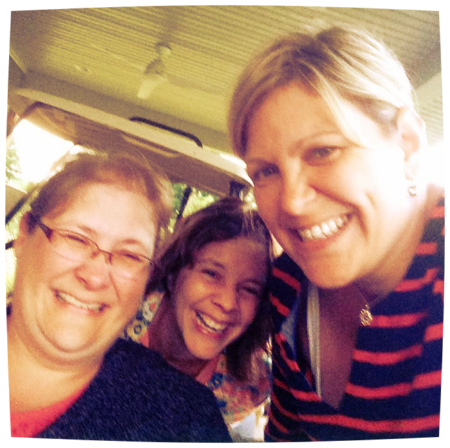 That's Karen on the left. What was so funny anyway?

We do other things though. Along with our husbands, we like to play cards so at least once a weekend, we try to squeeze a game or two in and we’ve really gotten to know each other this way. Karen often says one reason she liked us right away is because we didn’t treat her any differently. I guess that’s because we never really saw her as different. Why does a missing leg mean you’d be anything less than a whole person on the inside?

One night, they had just arrived at our house to play cards. We have two dogs and their absolute favorite thing to do is greet guests. They’re crazy, obnoxious, out-of-control and show everyone who comes over what bad pet owners we are. But thankfully, Karen and her husband love them.

Well, the youngest dog, Porter, had finished his greeting and went to rest on his ottoman. Ryan looked over and noticed that Karen only had one shoe by the door. Porter has a tendency to often take off with a single shoe and likes to keep it nearby him for comfort. Suddenly, Ryan exclaimed,

R:  Oh no, Karen, I think Porter took off with one of your shoes!

To us, she’s always just been Karen. When she had her surgery, though, I got a glimpse into the hidden struggles Karen has had to face for years. She needed help, whether she wanted it or not.

I had no problem taking her to the grocery store when she asked me for the first time. What mom isn’t an expert at grocery storing right?

Karen is an expert mom at grocery storing too but here’s the thing. She has to be a lot more intentional about it.

What grocery stores have scooters? Where are the scooters located? After her surgery, she couldn’t walk with her crutches into the store so someone had to bring her the scooter out to the parking lot.

Once inside, did the scooter actually have enough battery power to last the whole grocery store visit? Once, at Costco, the battery light was blinking rapidly because it needed recharged. She told one of the clerks that she didn’t know if the scooter would make it to the car and back to its storage spot for a recharge. The gentlemen told her to just drive it out to the car and they’d get it back inside for her. But what if the right worker hadn’t been around?

This has led to many conversations between us as a simple trip to the grocery store is never simple in Karen’s life. Just last week, I brought her out a scooter that was bent and wobbly. Pretty sure a car had hit it somewhere along the way. Do you have any idea how slowly those scooters go? When I drive it out to the car for her, it crosses my mind all the time that if it was a bit lighter, I could push the thing to my car faster than I can drive it. So, you’re forced to slow down your pace. Which we could probably all use, but she doesn’t get to choose.

She’s had workers walk right in front of her and not open the store doors for her. She’s had people ignore her at the deli counter and check-out lanes. Sometimes I have to go in for her to run an errand because a store has steps and no ramp. A hundred things we take for granted that are her everyday life.

The thing I admire about her is that she doesn’t let it stop her. If she was completely mobile, she’d run circles around me. She has two nearly grown children who show her so much respect. They’ve grown up knowing more about tenacity and perseverance than I could have ever learned as a child.

When I ask her about this positive outlook I see in her, she admits to having her moments. At times, she throws private pity parties. Well, thanks for letting me know you’re human!! I guess it all makes me realize, we learn to live with whatever “normal” life hands us.

I’m excited to say Karen has just recently learned about a special offer Nordstrom gives to amputees who have lost a leg. For a set price, they can purchase just one shoe! Again, something I’ve never even thought about but Karen buys two shoes even though she has no use for the right one, which she considers wasteful but what can you do?

She also learned that Nike offers a free one-time redemption of a tennis show to amputees. She’s taken both companies up on these offers.

I’m thankful for the friendship I have with Karen because I enjoy her and we have a lot of common interests. But I’m thankful too for what she’s taught me about paying attention. We could do a lot of little things in life to make it easier for others if we’d just give it some thought.