Meet Traci Email Me Saturday-7 Things The Mic Shop Privacy
Fly, Little One - A Back To School Post
My Sunday With The Methodists & All The Baptisms

My Sunday with the Lutherans 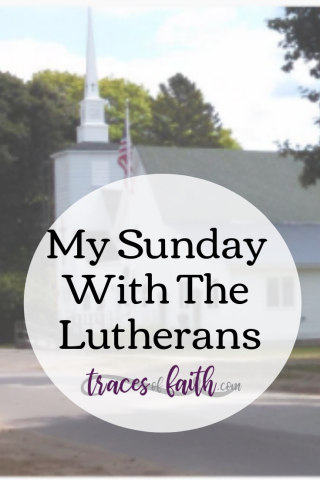 Disclaimer: Often times, writers put words down on paper as a way of processing their thoughts. The interesting thing about blogging is that you also share this “journaling” with a ton of readers. But what I find is that as I give you my thoughts, I get back a lot of “me too.”

I don’t always attend church when we’re on vacation but it’s always an adventure when I do. Like the time I dragged my cousin with me to a tiny church in northern Michigan. We sat at our own small table of two among many other tables of regulars. They served us coffee.  The wife of a husband-wife pastoral team taught us from Psalm 23. What a welcome they gave us!

But other Sundays when we’re away, I use that Sabbath to rest and enjoy time with the friends or family I am traveling with at that time. Both approaches have offered times of refreshment and worship.

This past summer, we went camping at the northern tip of the U.P. For those of you not familiar, this means we spent some time at the far north end of Michigan’s Upper Peninsula. Way up there by Lake Superior. Beautiful. Country. 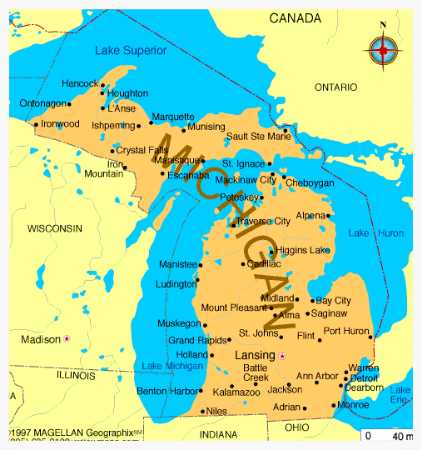 I had no plans to attend a church service during this trip. Often times, the day doesn’t really start happening until about 11 o’clock when we’re camping, so I didn’t figure I’d rush around and find a church, etc. But at this particular campground in Grand Marais, Michigan, the church does its very best to find you. It sits right across from the campground. All day long, its bells ring throughout the community. Sometimes just chimes. Other times, hymns of old.

My girlfriend and I decided we’d try out the service on Sunday. A Lutheran service. It would be my first. Since I knew all about the holy water of the Catholics and the homemade loaf of Communion bread of the Methodists, I could handle the Lutherans, right?

Sunday came and we dressed up in our finest, OK, cleanest, jeans and a nice shirt. Our finest camping attire. We walked over to the church. The moment we walked in the door, we received a warm greeting from the robed priest. A woman.

There are few things I love more than when God winks at me and says,

Let’s go on an adventure, shall we?

Moving inside the sanctuary, there were about 75 people in attendance that morning. I didn’t see a lot of little kids but otherwise, the age ranged from teenagers to senior adults. You could quickly tell who the local, regular attendees were because they participated in the service. Almost all of them.

It can be intimidating to walk into any new church. I mean, I’ve only known three Lutherans in my whole life and they all took a very serious, somber approach to their faith. I sort of thought the service would have a Catholic feel to it. Other than that, I didn’t know what to expect.

Well, immediately, Pastor Sharon identified herself as a licensed lay minister.  I jotted that term down in my bulletin so I could look it up later. She told us about how she shared the pastoring roles with her husband, Jon. He played the piano that particular Sunday.

The service did have a strong traditional liturgical feel to it. Several responsive readings, which we followed along with using a prayer book provided in the back of the pew. For the most part, prayers were formal. The hymns were timeless classics.

When it came time for Communion, the pastor (minister?) explained they served from an open table. I’d looked this one up already so I was in the know. This meant that anyone could take Communion. A belief some hold where the Lord’s Table is intended for everyone as a reminder of His life on earth, His death and resurrection. The Communion bread was a wafer. (Still loving the Methodists and their homemade bread here.) The wine was... wait for it.... wine (with the option of grape juice if you preferred). For years, I have wanted to take Communion with actual bread and wine. I certainly understood the reasons for offering up grape juice. But Jesus drank w-i-n-e.

We went forward in groups of about 5-7 and knelt at the altar. When it came my turn, I dipped my wafer in the wine, did the sign of the cross and I remembered again all Christ did for me.

My friend who grew up Catholic attended this service with me. She told me afterwards that she knew many of the prayers and responsive readings but they were often set to different tunes. Interesting.

It didn’t feel Baptist and really, not very Reformed either. With the exception of two things, it all seemed pretty foreign to me.

There was special music. An older man who spends his summers in Grand Marais sang a few George Beverly Shea songs. I knew of Shea, who sang at Billy Graham Crusades for years. This man had a super strong, confident voice. What a blessing to hear him sing that Sunday! When he broke into “I’d Rather Have Jesus,” it took me right back to my granddad’s living room, when he’d sit at the piano and play (by ear), singing all the old songs of our faith. It brought me to tears.

Then, upon completion of the service, we received a complimentary jar of freshly canned wild blueberry jam. Every guest received a jar. The pastoral couple also invited us to stick around for a church potluck. Oh, I know this one! Pastor Jon served up his famous chicken wings. The ladies of the church brought in sides and dessert. Over lunch, Jon told us about their ministry to this little community. He told us how much joint work the four churches in town do each year. How it’s the very best way to get anything done.

I enjoyed my worship time with the Lutherans. I found Jesus there! Right across from this campground, they’ve figured out how to be welcoming and non-intimidating. Very much the hands and feet of Jesus.