The Biggest Story - A Book Review

I received a copy of The Biggest Story, written by Kevin DeYoung, from NetGalley for the purpose of generating a review. This book released last month. Italicized quotes are from a blog article by the author or the book. The opinions expressed here are my own. 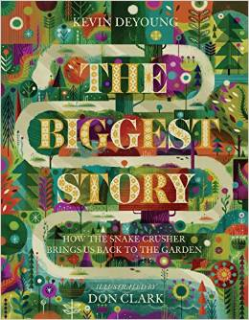 When you spend a lot of time teaching or writing or speaking or preaching, you sometimes agonize over the clearest way you can communicate. I used to give the announcements at our church. Leading up to Sunday morning, I would receive the information we wanted to convey to our church family. I’d work to decipher the most pertinent details about an event or a new ministry or a general update. Usually, we’d make any announcement for at least three weeks. The information was also included on  fliers or in church emails.

Yet, time and again, I’d be talking to people about an event and they’d say,

Oh, I hadn’t heard anything about that.

And while announcements certainly serve their purpose, what do we communicators do when we start to wonder if people are getting the real ministry message.

You know, the big stuff? Like God has had a plan since the beginning and you’re a part of it.

Pastor Kevin DeYoung looked for a different way to tell what he calls “the Greatest Story ever told.” He tells about his idea in an article over at thegospelcoatlition.org and I’m sharing a part of it here:

A number of years ago I did something different for my evening sermon. It was the week before Christmas and instead of preaching through the next verses of whatever book I was in, I wrote a story. I read the sermon that Sunday night like I was reading to my kids. I told them to imagine it was Christmas Eve and they were nestled in front of the fireplace listening to the good news about the baby Jesus. I did my best to make that sermon a beautiful story about the Greatest Story ever told.

In time, this sermon story became an illustrated book. The artwork by Don Clark found in this book, “The Biggest Story: How the Snake Crusher Brings Us Back to the Garden,” will wow you. Bold, bright colors and thought-provoking imagery. I hesitate to call this a children’s book, although it’s a great one to read with your kids. I read it with my daughter and we had some conversations about why the story unfolds as it does (the teaching tips in the back of the book helped). But if I call it a children’s book, that’s kind of saying it’s not for you. Or me. Necessarily. And I want it to be for all of us. I want to set it out on the coffee table and let it provoke conversation. 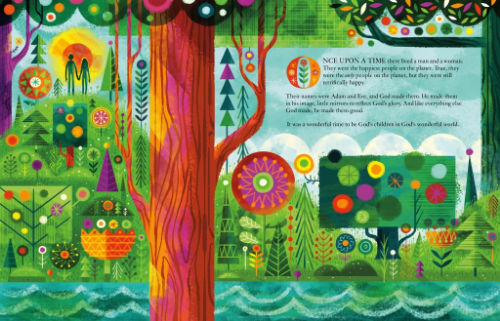 Starting with Adam and Eve, Kevin tells the story of sin entering the world. He tells about how bad that made things. How hard it would be to have a right relationship with God because of all the ways sin would get in the way.

Using a casual conversation style, the author narrates various Bible stories, often adding insight as to how God was at work.

In telling about some of the men God used: Isaac was sort of a weakling. Jacob was a selfish trickster. And Judah did such dumb stuff, we don’t even want to talk about it.

In telling about the New Adam, Jesus, and all the surprises that came from His life: The bumbling band of hand-picked disciples - that was curious.

In telling about our part now: We know it’s not the end because we haven’t made it back to the garden.

We know the Bible tells us of God and His story throughout history. But often times, people don’t fully get it. We need to give them the story in other ways. A book, a Bible study, a sermon. Whatever it takes to reach them.

This beautiful book, with its retelling of the biggest story, offers an excellent way to show others that God knows exactly what He’s doing. Always.