I did a little traveling recently. Lots of time in several airports, which I often find a little distracting. I love to people watch. I thoroughly enjoyed watching the young toddler in the Baltimore airport as she spun around in circles, asked strangers to share their snacks, climbed all over the chairs and basically ran around like a crazy baby in our gate lobby. It’s easy to spend hours scrolling through social media sites. But I wanted my time to be somewhat productive. I wouldn’t be able to write or read anything too deep. So I brought along two fiction books. Via these two novels I spent some of my airport time in Broken Wheel, Iowa and St. Louis, Missouri. (Actually I literarily and literally spent time in St. Louis. We had a short layover there). 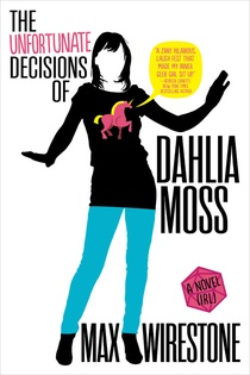 The first book I read was The Unfortunate Decisions of Dahlia Moss by Max Wirestone. The readers meet Dahlia first. A college grad living in St. Louis who has thus far made a career out of interviewing for jobs she doesn’t get. Currently, she’s living in Charice’s apartment. Pays rent when she can, which isn’t often. Charice is eccentric. She throws lots of parties and has people over for theme nights. One such evening, Jonah shows up at the apartment.

But really he’s there to see Dahlia. Apparently, he’s big into an online game called “Zoth.” In that game, he had a sword stolen. He wants to hire Dahlia to identify the thief so he can recover the sword. He offers Dahlia more money to do this than she has seen in some time. So she takes the job. That’s the last time she sees Jonah alive.

Can you see how this book could compete against all the airport distraction? I’ve never played an online fantasy game so that part had me a little lost. But the characters in the book were well-developed and witty. Especially Dahlia. I lived in St. Louis for a few years so I recognized the places Dahlia frequented. Central West End. Delmar Loop. Ted Drewes Ice Cream. I have memories there too. Dahlia’s adventure became my adventure, at least for a few hours. 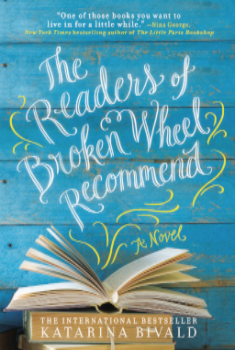 The second book was The Readers of Broken Wheel Recommend. It comes out January 19th and the publisher is sponsoring a giveaway for three copies of this book. Click on the link at the end of this post to enter and win a copy of your own! Originally this book was published in Sweden. Yet, it did an excellent job of traveling across the ocean and being highly readable. Nothing lost in translation as far as I could tell.

Sara and Amy became friends because of books. They never met, although Sara traveled clear from her town in Sweden to Broken Wheel, Iowa so they could. But they got to know one another through letters.

The only things that had come were the letters, beautifully handwritten letters. For a while, Sara could have sworn that they brought a piece of Iowa with them, a faint but unmistakable reminder of another, more timeless life, full of adventure and opportunity.

These idyllic words are what prompted Sara to plan her trip to visit Amy in Iowa. Except upon her arrival, she discovered that Amy, who had fought a long battle with illness, had passed away. The residents of the sleepy Midwest town knew Sara was coming though. Amy had told them. It seemed as if a little bit of their beloved Amy was still among them, through her friend.

As the story unfolds, Sara finds herself living in Amy’s house, meeting people she already knew very well thanks to Amy’s letters. Compared to Amy’s letters, though, she finds the town to be a little sad. It’s lacking in hope and she wonders what she can do to help. She does the only thing she knows to do, the very thing that’s always helped her, she shares her love of books with them. Using Amy’s extensive book collection, she opens up a bookstore of sorts in a downtown location. What she discovers is that books do indeed carry a bit of magic with them if you match up the right one with its ideal reader. Slowly, word about the new bookstore spreads throughout the region and Broken Wheel starts to come to life again.

Both books offered a great distraction from the “noise” of the airports. They also gave readers an inside look at two very different towns. The characters were likable and realized new things about themselves and others throughout the book. Everything a good fiction read should be.

Enter to win your own copy of The Readers of Broken Wheel Recommend!

I received copies of The Unfortunate Decisions of Dahlia Moss, written by Max Wireston, and The Readers of Broken Wheel Recommend, written by Katarina Bivald, from NetGalley for the purpose of generating a review. Italicized quotes are from the books. The opinions expressed here are my own.