Meet Traci Email Me Saturday-7 Things The Mic Shop Privacy
Moms, You Have My Vote
Literate Getaway - My Fall Reads

What My Grandpa Taught Me About Politics 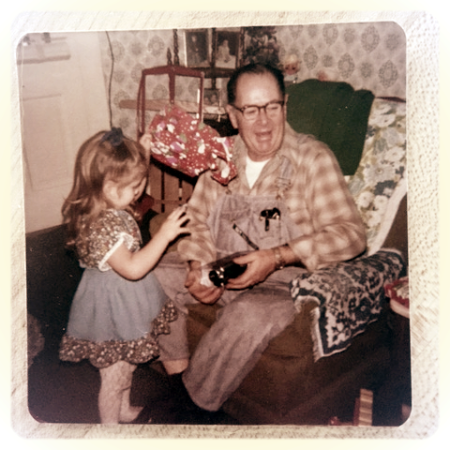 My grandpa owned a local bar. I’m not sure how many bars there were in our small town when I was a little girl, but I was only ever inside two of them. When Dad had us with him, we would often go to the bar. My grandma was usually there, and the minute we’d walk in, she and the other patrons would say, “Don’t tell your mom you were in here.” The other bar we went to was two doors down. They had a kitchen and served up actual food. So, if we got hungry when we were at the bar with my dad, someone would take us there to order a meal. Then, we’d take it back to the family bar and eat.

Sometime in my teen years, my grandpa got assaulted. He was driving home from closing down the bar and had the money bag with him. When he pulled into his driveway, he was suddenly attacked by someone. He got thrown to the ground and a boot heel pushed his skull into the gravel driveway. The money bag was stolen. I don’t know any other details than that. I remember going to the hospital where they’d taken my grandpa and seeing his scalp all bloody where there was an imprint of a heel.

They checked grandpa for a concussion, asking him some routine questions. How many hands do I have up, what month is it, that kind of thing. Then, they asked him who our current President was. Immediately, I turned to my mom and said, “He wouldn’t have known that answer before he got beat up.” My grandpa had only gone to school through the eighth grade before taking up farming full-time and becoming a small business owner. He never paid attention to national politics. He'd have probably told you he was too busy working.

He wasn’t a religious man either. I would often spend the night at my grandparent’s house and I remember a Jehovah’s Witness stopping by one time when I was there. If I recall correctly, I was in junior high at the time. The lady and I had a great conversation, in which I witnessed to her about my Jesus and the ways our religions were different. Grandpa sat quietly in his chair, listening to the entire exchange. After the lady left, he laughed so hard. He couldn’t believe the conversation. I heard him tell the story of his evangelizing granddaughter several times over the years.

So, I’ve established my grandpa wasn’t political or religious. Considering the political side, in particular, no one in my family paid much attention to that. I don’t remember ever having a political conversation of any kind until I was turning 18, preparing to vote for the first time. What few conversations I had at that time were with my friends and teachers at school.

Still, the government helped my family. As a little girl, my dad worked for the railroad and he would often be laid off for months at a time, especially when the weather got cold. I usually qualified for the free lunch program at school. I don’t recall ever having food stamps but there were various grocery assistance programs I remember participating in as a family. Dad was disabled from a work-related accident by the time I went to college, so I received a great deal of federal aid to assist with my higher education.

All of this to say, this political stuff is very new to me, although looking back I see how it benefited me. I have voted in nearly every election since I was 18. I research the candidates and I have a much greater knowledge of politics now than I used to. No matter how much I educate myself though, I realize the political views I hold come from the world lens I was given in the early days of my childhood. Yours do too.

I’m in complete awe over the reactions I’m seeing on social media since Trump won the election. People acting as if they might not be able to go on. I’m not judging or being critical. I truly don’t have the capacity to understand it. I guess you’d tell me I’m a victim of white privilege. Again, looking back at my years of growing up, realizing all the miraculous ways my mom stretched a dollar, you’d be the first person to ever call me privileged. Regardless of who the victor was in this election, I have never in my whole life felt like my world would come to an end based on who sat in the Oval Office.

I read online that 46% of Americans didn’t even vote, and grandpa would have been one of them. He was a complicated man. One of my favorite people ever. I was in my 20’s when he died. A few weeks after we’d laid him to rest-in the cemetery just up the road from our family’s property-I went to visit his grave. The caretaker of the cemetery happened to be there that afternoon. Although I didn’t know him in particular, I knew his family well. He stopped to offer his condolences and we chatted for a few minutes. In that brief conversation, he told me how generous my grandpa had always been in giving money to the methodist church affiliated with the cemetery. My grandpa, the man who never darkened the door of a church in my whole life. The one who couldn’t get over my zealous attempt to convert a Jehovah’s Witness.

No one would call my grandpa religious or political (with the possible exception of the one local campaign when he supported a new sheriff because the old one had gone and ticked him off). He was a community man though. Again, it’s complicated, so don’t think I’m making him out to be a closet saint. This story about him giving to the local church fit though. It went along with all the stories I’d heard from his neighbors, of all colors, who he helped financially when he could. It made so much sense knowing what a good, kind grandpa he’d been to my brothers and me. It explained why, every time we went out for breakfast at a local restaurant, several people would go out of their way to say hi to the man and many would stop for a few minutes of small talk.

That’s the lens in which I see the world. My perspective remains so very local. Being charitable with everyone in your community. Giving to your local church, so they can help the disadvantaged. Frequenting small businesses because they contribute a ton to our communities. Encouraging our local schools and also higher education. Being a kind friend.

I don’t think Washington can take that away.