My Sixth Hour Prayers With The Orthodox Christians 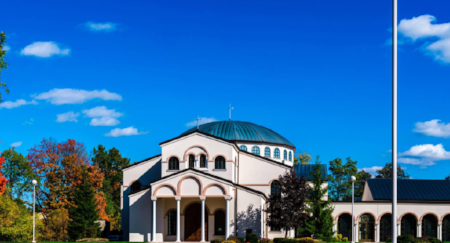 It all started with a book. You guys, for me, it always starts with a book. I read Scott Cairns' book, Short Trip to the Edge (you can read my review here) and he talked about his experiences converting to Orthodox Christianity. I'd maybe heard of this sect of Christianity once or twice, but I realized I had no idea how they practiced our faith. Then, I recently did some reading on the history of the church, and I learned we used to be ONE church (God must have loved that). Orthodox and Catholics split apart in the Great Schism of 1054, and about five hundred years later, Luther came along and suggested we come up with hundreds and hundreds of denominations. Well, that's not exactly what he intended, but you understand where I'm coming from.

Anyway, I got to thinking, as I tend to do when I read about how other people worship Jesus, what if the ways they worship our Savior could add additional meaning to my own faith? Truly, what if I'm missing out on some key elements of my faith practice, because I've yet to learn about how Orthodox Christians worship? Then, I asked a question on Facebook about how many denominations my friends have been a part of, and the answer was lots and lots. Well, not all of my friends - a few have only ever stuck with one denomination. But I did notice, not one friend who responded had practiced Christian Orthodoxy.

For some time now, I've sensed God suggesting I incorporate more quiet times of prayer and contemplation in my weekly faith walk. I've looked for churches who offer mid-week services or open times of prayer, and in my area at least, they seem few and far between. We've reached the point in my story where I came across St. Nicholas Antiochian Orthodox Church. They offer "Sixth Hours Prayers" every Wednesday at noon. I have no idea what the term "Sixth Hour Prayers" means. In my tradition, we used to sing a song called "Sweet Hour of Prayer," but I'm thinking that's different.

Yesterday, I attended Sixth Hour Prayers with the Orthodox Christians. It was a wonderful experience, and I'll be going back, but I thought I'd give you a few observations from my very first visit, while they're still fresh.

I wasn't sure where to go upon arrival. I parked by the other half a dozen cars in the parking lot, and timed my entry with another lady who seemed to know what she was doing. After asking her where the prayer service was, I told her it was my first time (which she likely had already figured out). She welcomed me and pointed me in the right direction. This particular service took place in the chapel, rather than the sanctuary (forgive me if I don't have these terms right). The hallway leading to the chapel had stained glass windows hung from the ceiling, depicting various Bible characters and stories. I arrived at the chapel a few minutes before we were scheduled to start.

As I walked into the chapel, there were bulletins available, which gave me a spark of confidence that I'd be able to follow along better with this in hand. I did a quick look to my right and left, but saw no basin of Holy Water. Instead, there was a painting in the center of the entryway on a stand. Icons are a really big deal in the Orthodox tradition, so I noted the artwork, but didn't spend too much time staring at it. I couldn't tell you who the picture depicted. Once I sat down, I did notice other people who came in crossed themselves at the entry and bowed slightly to kiss the painting. I missed that one. Settling in to my wooden pew (yes, they had pews complete with purple cushions), I took note of the reverent silence. It's always what I notice most when I attend a church service offering a more formal liturgy.

There were about ten of us at the service, including the priest. A lady assisted him with some of the readings. She started by reading a story from a separate book about a saint. Then, the priest led us in the opening prayer. He chanted every word he uttered. I thought to myself, he actually has a decent chanting voice, and then I wondered if all priests did? If you're a tone-deaf priest, does that affect your chanting ability?

The heart of the service was in the words we offered. Blessed is our God. Holy God, have mercy on us. O Lord, save Thy people and bless Thine inheritance. The Lord's Prayer was recited a couple times, and I had no trouble following that. We made the sign of the cross many times, and I'm pretty sure it was when the trinity as a whole was referenced. I was somewhat prepared for this next part because of the reading I'd done before hand, but our group said Lord have mercy a lot. It's what Orthodox Christians do, similar to how the Catholics recite the prayers of the Rosary. However, if I am counting correctly, we said that phrase 73 times in the 30-minute service! There were other phrases we repeated as well, but none as often as this one. At one point, we said it 40 times consecutively, and I thought, are we supposed to count on our fingers to make sure we say it the right number of times? They did seem to recite the phrase in a sequence of four, so that would help.

The reader led us through readings of Psalm 53, 54 and 90 (all included in our bulletins). I don't know if they have their own version of the Bible, but whatever translation they used, it was formal, with lots of thees and thous. Then, she turned to the Bible, and started to read a passage written by "Paul to the Hebrews." My ears perked right up, because to my knowledge, no one is sure who wrote Hebrews. It's one of my favorite trick questions I ask the kids in Sunday School. Well, at that point, the priest came over to the stand holding the Bible and other books, turned a few pages and motioned the reader could continue. She read to us from the letter "Paul wrote to the Romans (the majority of scholars agree he did write this one)." Specifically, she read out of chapter 8. I'm very familiar with this passage, because my mom wrote Romans 8:28 in one of my early Bibles.

And we know that all things work together for good to those who love God, to those who are the called according to his purpose.

There was a screen separating a part of the room at the front. At one point, the priest went out a side door and stood behind that screen. He opened it up and took a metal cross in his hand. He kissed it (I think - they do this very quickly) and waved it in the direction of the congregants. I thought this might be a point where they offered Communion, and I figured it would not include me, since I was a Protestant. But they didn't have Communion at this prayer service. After the reading of the Romans passage, the priest did give a brief sermon/homily/what do they call it? This portion only lasted three to five minutes. His points were excellent, talking about how this verse refers to ALL THINGS - that means the good and the bad. We must trust God to do his work.

At the end of the service, everyone stood up and I sensed it wasn't really time to walk out of the chapel yet. I turned slightly, and the couple in the row behind me motioned for me to go first, pointing towards the front of the chapel. I looked quickly, and saw another individual leaning down and kissing what appeared to be a painting of Mary and then of Jesus. I shook my head slightly, and they politely walked past me. A few moments later, a man from the crowd came over and asked about my attendance that day. He'd briefly introduced himself to me before the prayer service, but we had a few more minutes to talk afterwards. I told him I wasn't Orthodox but wanted to learn more about it. He took me to the sanctuary, told me a little bit of the history of this beautiful church, pointed out the various Bible stories painted on the walls of the sanctuary and explained the stained glass windows I'd seen in the hall were from the old church they'd moved out of about fifteen years prior. He also pointed out the sanctuary was being decorated in blue for a service that night. After the brief tour, he took me back to meet the priest and some of the parishioners. Several times, they told me I should come back again, even try a Sunday morning with them.

As I mentioned, I'm longing for a space to have some quiet time with God during the week. I'll definitely visit St. Nicholas again. There, I felt a tremendous connection with tradition. All of my senses were engaged with the worship experience (it even smelled good, although without Communion or kissing the icons, I guess I didn't really "taste" anything). I met several nice brothers and sisters. Perhaps most important, my soul found rest there.