Meet Traci Email Me Saturday-7 Things The Mic Shop Privacy
Christian Care Ministry - Tabitha Was Kind
Her View From Home: She Lived to be 105 - and This Mantra Got Her Through 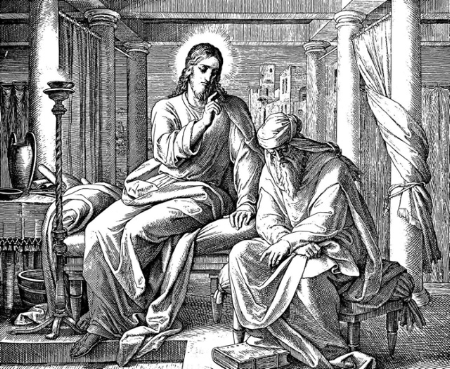 Ask most people, believers or seekers, and they can recite this common verse word for word. We see signs held up at sporting events, and the black shading under a player’s eyes often tout the Scripture reference.

For God so loved the world that he gave his one and only son, that whoever believes in him shall not perish but have eternal life.” John 3:16

Someone heard those words first though. Nicodemus. A Jewish religious leader, more specifically a Pharisee, who came to speak with Jesus personally. He had some questions he was honestly working through, and he hoped to find some answers. He didn’t come to attack or accuse.

In an interesting exchange where Nicodemus questioned whether an old man was to be born again by going back into his mother’s womb, Jesus explained his purpose for coming. God sent his only son as the way for us to avoid death and step into life eternal. Believers are born again into new life.

It’s a fascinating conversation really. We know Jesus didn’t mince words when it came to his condemnation of the way Pharisees emphasized the law without considering the hardships it brought on the people. The account of his displaying righteous anger as he overturned the money changers’ tables in the Temple courts is used to justify all manner of crass behavior on social media. I believe he does want us to be catalysts for change, but not at the cost of basic human dignity toward the average person.

To read my thoughts about what the relationship between Nicodemus and Jesus has to teach us about being kind on social media, head on over and read my piece at Christian Care Ministry: Consider Nicodemus.