Meet Traci Email Me Saturday-7 Things The Mic Shop Privacy
We All Want To Feel A Little Less Alone
What Does Progress Cost Us?

The Support We Offer One Another In Marriage 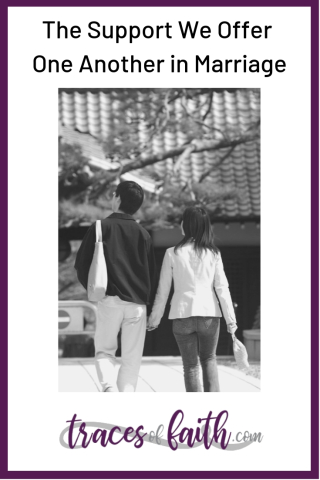 Today's story is about a girl in her late 20s, living in a four-apartment brick building in St. Louis. Walking distance to the zoo. Her roads to here, some gravel and others six-lane highways, had not always been smooth, but with Jesus by her side and in her heart, she was at a place in her life where she felt healthy and whole. One day in particular, she went to her mailbox in the back of the apartment building, and pulled out a magazine, Writer's Digest. She didn't know what to make of it, for she had not signed up for a subscription. She mentioned this to the boy she'd been dating for a few months, and he told her the magazine was a gift from him. He'd paid for a year's subscription because he knew she loved writing, and thought maybe this magazine could get her started on her way.

This couple married shortly thereafter and moved to Michigan. The husband is an engineer through and through, and he enjoyed building cars for a living. He even raced a few of them in his day. The wife had many passions and she chose a career path familiar to her, working in collegiate athletics at a nearby university. The excitement of the games always thrilled her. Nothing beats a buzzer beater in which your teams gets the victory. In the back of her mind, though, she knew this career in athletics marketing was a short-lived one. It wasn't what she'd want for her family long-term. Although she spent some of her time writing, it wasn't the deep soul work that continued to beckon her. It was the safe thing, and after a while, the Writer's Digest magazines sat collecting dust in a corner of the office, so she donated them to a local charity.

From the very beginning, the couple had a life full of good friends and countless opportunities. There was great strength in having one another, and both thrived in that. The engineer made a decision to go from building cars to building furniture. The wife left behind her career in marketing to make the move closer to family. The couple needed more than a few years to adjust, but eventually settled in to a new home in a wonderful community. Having a baby became a real focus, and the wife felt herself separating from a full-time working world, which had included many nights and weekends. After a while, she couldn't imagine a life doing that again. One morning, she met a friend for coffee and, with not a single copy of Writer's Digest in her possession anymore, they discussed how to start a blog.

The wife didn't know what she was doing. She only knew it felt good and right to be writing again. The husband said it didn't matter what she already knew, for he was confident she was smart enough and talented enough to figure it out. She knew she had his full support, and it meant the world. So, they settled into this pattern. She would write about church and theology and other matters of faith. These things weren't his passion, but he'd read some of her words. To him it was blah, blah, blah, the church has been called to be one, and simply put, we're not doing it well. He'd read and listen, offering advice when he could. He supported her in other ways as well, sending her to conferences, buying her blank notebooks and pens, telling everyone who happened to mention the word "church" to him at work, about his wife who writes a faith-based blog. From time to time, the husband would send the wife emails to edit from his work. These things weren't her passion, but she could construct an accurate sentence, correct spelling errors, and gauge the overall emotion evoked in the email message. To her it was blah, blah, blah, the chair has a screw loose. But she was happy to help.

In some ways they're different, this couple. But when it comes to the things that matter, they think alike. Fifteen years of marriage, and they're still supporting one another. They've stared at big dreams, and together, they're chasing them.