Meet Traci Email Me Saturday-7 Things The Mic Shop Privacy
The Support We Offer One Another In Marriage
Her View From Home: I Gave My Baby to a Stranger in a Church Nursery - And Found Lifelong Friendship

What Does Progress Cost Us?

In my small town of origin, the elementary schools were separated by grades. The fifth and sixth grade school, the final one before you entered the larger junior high, was only a few blocks from grandma and grandpa's house. And in between their house and the school, a bit closer to the school, was a candy store. It wasn't large, and it seems like maybe they sold other items of convenience, but all I remember is the wooden counter filled with jars of individual candy. Also buckets of candy sitting on shelves hung on the wall behind the counter. Often times in those two years of schooling, I would spend the night with my grandparents because their house was close enough for me to walk to school. We didn't live in town, so nothing was close to our house.

Almost every visit to grandma and grandpa's house included a trip to that candy store. A two-story gray building with dilapidated steps leading to the front door. A quiet street that experienced its rush hour traffic twice daily, around eight in the morning and three in the afternoon. The elderly couple who owned the store always greeted us with a smile, as if it was impossible to have a grumpy demeanor when you made a living selling candy to young children. The couple lived in the small apartment upstairs, so one would assume they had access to all the candy they wanted anytime.

Students at this elementary school had "Fun Fridays," where we would get to watch a movie in the gym. I spent a lot of Thursday nights with my grandparents on Third Street, packing my own overnight bag and backpack, asking Mom for enough money to buy a bag of popcorn at school, and a little extra to stop by the candy store. I always bought a couple 10-cent bag of pop rocks, while my other selections varied. Pixie sticks and small Jolly Rancher candies cost next to nothing, so I would spend my remaining few cents on these items. 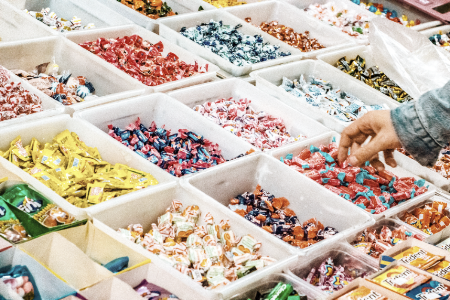 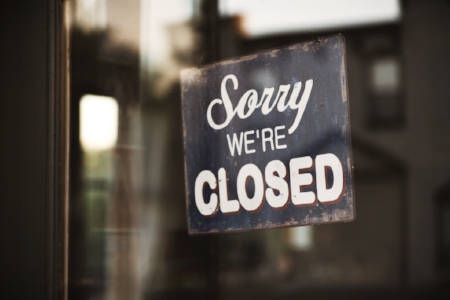 When the store closed in the mid-90s, I didn't live in the area anymore. The neighborhood had already lost Jack's, home of the best tenderloin sandwiches and popcorn while you waited. I was sad to hear another town treasure had closed their doors, and years later, to learn the locally-owned grocery store, situated on the other side of this school, with the butcher counter where everyone in the know would buy their meat, was no longer open either. Two families who had invested in a community for years, unable to make a living doing so anymore.

I returned to town when my grandma passed away. A local church hosted a funeral luncheon for my family. One of the ladies who served our meal was the candy store owner from all those years ago. She still had a smile on her face, serving her "customers." We had a few minutes to speak, and she had stories about my grandparents I had never heard.

For some time now, I've had this story on my heart, but I'm not sure why. Last weekend, I spoke at two local churches. These churches aren't the flashiest or the fanciest in town. They meet in buildings that have stood in their small communities for some time. Both groups had families with multiple generations of women born and raised in their church family. Surrounded by these faithful community members, I could have wept. Oh, the stories they told us as we shared with one another around the table! The memories they have of how their towns used to be, before they changed.

Its seems like sometimes we spend a lot of our time pushing forward. We want progress, and we can look backwards in disdain, wondering at how unenlightened we were in times past. Bigger and better isn't always, well, better. In my past, I could walk to a candy store and get a bag of candy for about a dollar when I had sleepovers at my grandparents. More recently, I had one group of women at church serve me Jell-o fluff, while the other offered breakfast casserole muffins and sausage family style, with all the iced tea and coffee I could drink.

A trip to the donut shop. A dollar (OK, maybe two) in a child's hand to buy all the candy they can with it. A group of women gathered around the table at church. These simpler things, they aren't all that bad. In fact, I think they're a really big deal. Amidst all our progress, I hope we're giving ourselves, and certainly our children, these types of pleasures in life as well.