Meet Traci Email Me Saturday-7 Things The Mic Shop Privacy
For My Daughter's Future Husband, I Pray
Guest Post: Why I Use Prayer Beads (Despite Being Protestant)

If These Five Biblical Women Started Attending My Church

In honor of VBS starting tonight, I'm posting this fictional account where I consider what I'd do if these obscure women of the Bible started attending the local church. If you're not familiar with these names, no worries. Five years ago, I didn't know them either. God knows their names though. Our VBS lessons this weekend focus on the women and men who formed the early church. More obscure names. God knows them too.

When it comes to Bible stories, these aren't the big ones you grow up learning about in Sunday School. These women aren’t the likes of Eve or Esther or Ruth or Mary. In fact, until I began reading the Bible in its entirety, I couldn’t have told you who these women were. Still, they were faithful. They had specific Kingdom work to accomplish, and did what God asked of them.

We’re not the famous ones either. Those of us who simply set out to do what God would have us to do. We don’t want to be famous, just obedient. That got me thinking. What if these obscure women started attending my church today, and we set out to do ministry together? 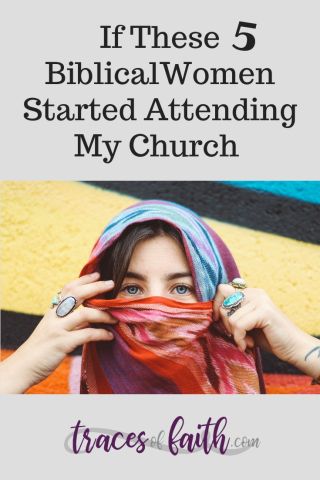 But Jael, Heber’s wife, picked up a tent peg and a hammer and went quietly to [Sisera] while he lay fast asleep, exhausted. She drove the peg through his temple into the ground, and he died.  Judges 4:21

Maybe you hadn’t heard about Jael. She can be downright scary. The first thing I’d do upon meeting her is invite her to coffee, because that woman has a story. I’d suggest a public meeting place, because her methods strike me as somewhat violent. I’d ask her about the time she assisted Deborah in conquering the Canaanites, but I’d prefer there be a roomful of witnesses to our conversation, just in case. If you serve on a church committee who needs to get things done, Jael might be your gal.

And Jephthah made a vow to the Lord: "If you give the Ammonites into my hands, whatever comes out of the door of my house to meet me when I return in triumph from the Ammonites will be the Lord’s, and I will sacrifice it as a burnt offering."

When Jephthah returned to his home in Mizpah, who should come out to meet him but his daughter, dancing to the sound of timbrels!  Judges 11:30-31, 34a

Upon meeting this young woman, I’d ask for her name. In the face of such tragedy, I would at the very least want to call the girl by her name. For the short amount of time she attended our church, we’d ask her to serve in the praise and worship band, because she appears to have a love for music. I’d be her safe place to talk about what are obviously, um, some daddy issues. Just as the young women of Israel did, I would ask the women of our church to come together for four days every year to commemorate her.

Give my greetings to the brothers and sisters at Laodicea, and to Nympha and the church in her house.  Colossians 4:15

I've always wondered what it was like to be part of a house church. Being an expert, I could learn about it firsthand from her. Did she ever teach? Lead worship? Pray? I know she didn't have to be silent in her own house! When we look to host more intimate gatherings, I know Nympha would open her doors. A woman willing to serve. Delightful!

Greet Andronicus and Junia, my fellow Jews who have been in prison with me. They are outstanding among the apostles, and they were in Christ before I was.  Romans16:7

If she was at all willing, I’d ask Junia to help us in the church kitchen, because Italian food. While we were cooking up large batches of pasta and marinara, I’d ask her if she knew Priscilla, Mary, Tryphaena, Tryphosa, Persis, the mother of Rufus, Julia, and the sister of Nereus.* The Roman congregations were full of prominent believers and from their earliest days, did important church work. I would also ask Junia to clear up once and for all, was she an apostle or only well-known to the apostles? Regardless of whether she carried this prestigious title or not, I’d assure her the church today could use her knowledge and guidance.

I commend to you our sister Phoebe, who is a deacon of the church in Cenchreae. I ask you to receive her in the Lord in a way worthy of his people and to give her any help she may need from you, for she has been the benefactor of many people, including me.  Romans 16:1-2

Speaking of the Roman churches, I would ask Phoebe the deaconess from the church in Cenchraea how on earth, as a woman, did she travel 800 miles to deliver Paul’s letter to the Romans? I’d ask what it was like to live in a port city along the Mediterranean Sea. Also, was Corinth as crazy a city as they say? Then, what exactly was her role as a deaconess? When it comes to where I’d want Phoebe to serve in my local church, it should go without saying. Deacon. However, if she’d provide her own job description, that would be a big help.

* This list of eight women greeted by Paul in the Roman congregations was taken from the Women’s Bible Commentary.