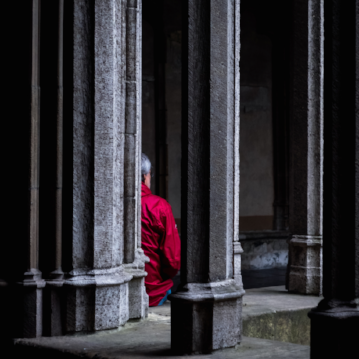 Who hasn’t been influenced by the Hybels family? Evangelical royalty. While engaged, my husband and I learned we would be moving immediately after getting married. We made plans to find our first church home together, in a place unfamiliar to both of us. A pastor friend told us about Willow Creek’s directory of churches online. We used it then to find our first church home, and have referenced it several times over the years.

How many of us Christian women have read Shauna Niequiest (Bill’s daughter) and wept over her honesty and commitment to faith and family, all while mixing up one of her delectable recipes for that evening’s gathering around the table? When we read Lynne Hybels' (his wife's) words about foreign missions and church around the world, we are reminded God is at work everywhere, not just in our one local church. This family is one of us.

When we learn sin has yet again entered the church; wrongs committed, and overlooked, covered up, what is the correct Christian response?

What would Jesus do? He called out the wrong, but I think it saddened him to do so. Also, he always allowed for repentance.

Progressive Christians immediately call for justice. Resignations, further investigation, real consequences for crimes against the women who were victimized.

Conservative Christians shake their head in despair. They acknowledge a lack of integrity in this great leader, and want to move on, not talking about it anymore.

Both of these reactions are understandable. The writer of Romans teaches us:

Just as our bodies have many parts and each part has a special function, so it is with Christ’s body. We are all parts of his one body, and each of us has different work to do. And since we are all one body in Christ, we belong to each other, and each of us needs all the others. (Romans 12:4-5)

Each of us has different work to do. God has given a great and holy fire to many Christians. He calls others to react to these wrongs in a more private way. Here’s the part of the passage I think we should consider.

Each of us needs all the others.

When these atrocities happen in Christ’s church, here is how I am led to respond. My heart instantly grieves. I ache for the women who were hurt by a representative of the church. I am deeply saddened to realize our Christian influence is tarnished yet again. I think of those who will point their fingers, saying “hypocrites.” I also pray for my Christian family members, the Hybels. I despair over a family who has been committed to gospel ministry, and now find themselves deeply wounded by hidden truths. I think of the conversations they are having around their dining room tables. I pray this could be a time of truth-telling and repentance, including any private conversations that need to be had with the victims and their families.

This a time of deep mourning. In other words, I lament first.

We all need to come together, as one body of Christ, and lament. Women were wronged. To the world, the church shows itself to be a house full of sinners, no different from anyone else in a significant way. A family realizes a need for grace and mercy. Prayerfully, I sit with what has happened, and I ask God to be at work in each and every life affected. I don’t rush into a response. I consider the feelings of all those impacted by the news and ensuing investigations.

I lovingly offer it all up to God. Then, and only then, do I act as I believe God would have me to do. Lament first, act later.