Dwell - Whatever Is Honorable

My daughter was little, maybe four or five. We went to our local movie theater, who blesses us with affordable pricing and cheap eats. On our way in, my daughter looked down and saw a twenty-dollar bill. Glorious riches to a young girl. She got all excited and picked it up from the asphalt where it had been dropped and abandoned.

After looking around and finding no one else nearby, I spoke quickly,

You can't keep that. It's not ours.

When we reached the ticket counter, my girl handed it to the girl at the register. She explained we'd found the money on the ground outside, and would she please keep it in case someone came back looking for it. The worker slid it under the register and said she would do so.

I thought about this incident for a long while after it happened. There's not a doubt in my mind no one came back to claim that money. Where would the money go if it did remain unclaimed?  Maybe the worker had ended up pocketing it? Had I done the right thing?

So I did what we do these days. I took to Facebook for advice. I asked them if I'd done right by my daughter. There had been plenty of times in my own life when I had received back too much money from a purchase, etc. I placed a high value on living with integrity and not taking anything that wasn't mine. Of course I wanted to instill that quality in my daughter (and I was leaning on the Holy Spirit for a ton of additional help).

When there is $20 lying on the asphalt outside of a public movie theater, who does it belong to? Is there a parable to address this?

The answered I received on Facebook varied widely. Many (most?) thought I should have let her have it. When there is no sure way of identifying it, finders/keepers. One suggestion was to put have the theater worker put the money in an envelope, and if it wasn't claimed that week, leave a phone number for my daughter to come pick it up. I liked that suggestion. Still other friends agreed with me, acknowledging it was a dilemma.

My daughter would have liked that $20. Think of all the goodies she could have gotten down the street at the Dollar Store. I don't know if I did the right thing or not. It's subjective. 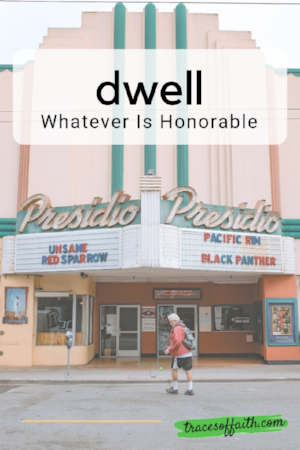 Integrity. Honorable living. That's not up for debate though. One thing is certain, my daughter learned a valuable lesson that day; when making choices about right or wrong; we need to dwell on what is honorable. Our world lacks integrity these days. Maybe it always has. We're not in our perfect home yet.

She's a few years older now, and I see her learning to ask God for discernment. It's a slow process. Discernment itself often does not come quickly. We pray for it expectantly. We use lessons like finding $20 on the ground to teach us about obedience. We don't always get it right.

However, at the end of the day, if I am raising a daughter who knows honesty is always the best policy, and that God blesses honorable living; well, it was worth every penny of that twenty dollars. 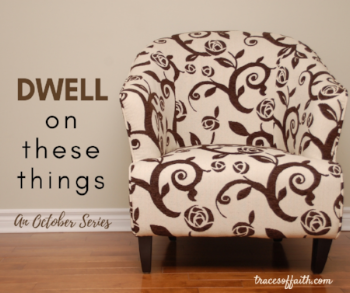 This is the second post in my October series, #dwellonthesethings. Here's a link to the first one:

Dwell - Whatever Is True