Hope In A Bowl Of Soup

Every year, we ate Christmas dinner at Grandma’s house. Driving there in the car,  I’d pull my nose out of the book about the time we’d hit the big hill on her gravel road. A few minutes later, we’d see the small, white house – her closest neighbor.

I got a lot of reading done in the 45 minutes it took to get from our house to hers.

As we slowed down to turn into the long lane that was her driveway, I wondered which of my cousins were already there. Was there still enough daylight to go exploring in the barn? Would we get in trouble if we climbed on the roof of the pig-less pig pen? Would the roof cave in under our collective weight? Regardless, I knew just up ahead was an evening filled with cousins, presents and good food.

I’m not sure whose idea it was, but at some point we got away from our traditional holiday meal of ham and cheesy potatoes. Maybe it was because, as grandma got older, the adults wanted to take some of the responsibility off her hands. My aunts started offering up soups; usually chili, potato, and vegetable. 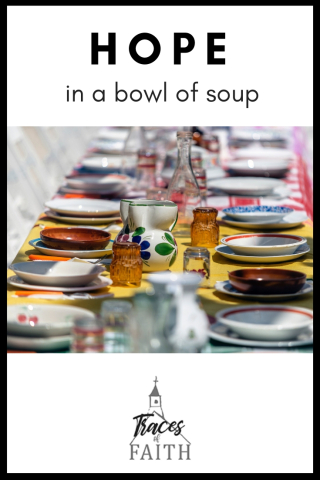 It’s the vegetable soup I remember most. As a kid, I wouldn’t touch the stuff. At home, when I started smelling a roast cooking in the oven, I became disappointed, rolling my eyes and hoping Mom would at least remember to cut me some raw carrots. I couldn’t stand them cooked. Until I discovered ranch dressing, I didn’t like the potatoes prepared with the roast either. Pot roast was definitely not my favorite meal. To make matters worse, I knew the leftovers from this meal would end up being vegetable soup.

My mom and her sisters liked vegetable soup though. In our family, it was a tradition all its own. Grandma liked hers with a can of Brooks chili beans in it. Most of the men didn’t like diced tomatoes in theirs; but at Christmas dinner, the women put them in anyway because the men gravitated toward the chili. A little cabbage, carrots, corn, green beans, potatoes. Celery was optional. Is it any wonder I didn’t like this soup as a kid? It was downright healthy!

While the soups simmered on the stovetop, we’d dig into the appetizers. One of the many hunters in our family usually offered up venison summer sausage, partnered with squares of cheese on a round Ritz cracker. Someone would have picked up a cheeseball from the local grocery store deli. It was my favorite, the perfect balance of cream cheese and shredded cheddar. Years later, I’d write one of my aunts, asking if she could get me the recipe.

Long before Pinterest came on the scene, the women in our family served up trendy appetizers and sides. I remember ranch-flavored oyster crackers, apple salad with Snickers whipped in, marshmallow cream fruit dip, Chex mix and Puppy chow. Every inch of counter space and the entire kitchen table filled to overflowing.

Grandma always mixed up a pitcher of Kool Aid. One of our aunts would stand near the disposable cups, ready to hand off the Sharpie marker to ensure we’d only use one – our own – the entire evening. The adults always had coffee. Cup after cup of coffee.

If us kids ate all our soup – as if any of us were still hungry by that point – we could move on to the dessert table. One of my aunts shares her birthday with the Christ child, so we’d sometimes have cupcakes or a birthday cake. Also cheesecake, Rice Krispy treats and pecan (pronounced puh-con) pie.

I know what love is if it can be offered up on a platter of cheese and crackers. If it smells anything like a stovetop full of soups. If it looks like my grandma and her adult daughters bustling away in her kitchen. If it tastes like cherry cheesecake. If it can be heard in the uproariousness of thirty-plus people in one single-story farmhouse.