Where Our Christian Traditions Intersect

This post has been on my mind for some time now, but I wasn't sure how to wrap it up in a pretty bow. I heard a critical voice or two (calling you out enemy) in my mind, telling me how it could be misunderstood. Yet, I've learned this about God; if he plants an idea in your heart, you might as well tend to that. Or get swallowed by a big fish. So, here we go.

For you have heard of my previous way of life in Judaism, how intensely I persecuted the church of God and tried to destroy it. I was advancing in Judaism beyond many of my own age among my people and was extremely zealous for the traditions of my fathers. Galatians 1: 13-14

These are strong words from St. Paul. Growing up, I had a lot of zeal for my "religion." As a Southern Baptist, I could have rattled off what was wrong about other denominations. It's not as if we had Sunday School lessons on these things, but somewhere along the way, an understanding developed. The biggest culprits of heresy, at least in my small world, were Catholics. I wasn't trying to destroy them, but I knew better than to emulate them.

That was 25+ years ago. I've visited a few Catholic churches since then. I've had insightful conversations with actual Catholics. I've done a ton of reading. I've experienced Mass myself a number of times. The same could be said about Presbyterians, Methodists, Lutherans, Orthodox, Non-denominational. My misgivings have subsided as I realized the deep commitment for Jesus that believers in these faith communities can have. As I've opened my mind and heart, I've learned from them, and I hope they learn from me.

A while back, my Reformed church rolled out a new idea. In an effort to prepare our hearts for worship (read, get over the fact that we spent the last ten minutes at home yelling at one another to get read and get out of the door already), we were encouraged to "Park, Pause and Pray." This concept was mentioned during announcements, we received social media reminders, and there were signs made and placed in the parking lot.

The heart behind this idea was good. Do not misunderstood what I am about to say (because that enemy of ours wants to wreak havoc in your mind as well).

Here was my first thought when I heard about this idea (which, being the Protestant I am, I never participated in); the church has already implemented ways for us to prepare our hearts for worship. We don't need another new thing.

The Catholics dip their fingers in holy water, making the sign of the cross. They genuflect before taking their place on a pew. Flipping down the kneeler, they pray.

The Orthodox venerate an icon (or four) upon entering the nave.

Other Christian traditions begin worship by reading from a Prayer Book or participating in corporate prayer.

We were trying to reinvent the wheel. That's what reformers do, and I get that. Here's what I've learned. Evangelicals, hear me because I think it's really important. The treasures our ancient faith offers us are not bad. In fact, they can be beautiful. 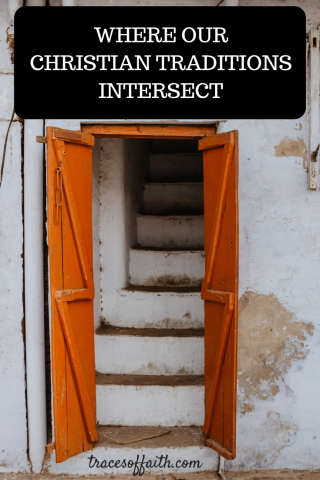 I've examined this tendency in me... my tendency to be extremely jealous for the traditions of my fathers. Namely, identifying what was wrong with all other sects of Christianity. I was fearful of being led astray. I didn't trust the Holy Spirit enough to give me discernment about what would enhance my faith, and what would damage it.

I thought holding a Rosary while I prayed might be idolatry. Until the night my father died, and all I could think to do was hold a Bible in my hands. The feeling that washes over me every time I hold a hymnal, and a hundred glorious Sundays from days gone by flash through my mind.

I thought looking at an icon, let alone venerating (kissing it) was worshiping a graven image. Until tears fell on my own Prayer Rope in church this year, on Palm Sunday, after I'd learned of the bombing in a Coptic Church in Cairo. In my deep sorrow over the fact that believers are no longer safe in church, I brought that rope to my lips. Lord Jesus, have mercy.

I thought Holy Water was Catholic, and thus bad. Not sure why (still not sure about this taboo). Until I entered a Catholic Church for my first Ash Wednesday service, and I felt that cool water on my fingertips. At that moment, I felt deep, holy communion with the One who offers Living Water.

It occurred to me, many of our liturgical practices all intend to do the same thing - prepare our hearts to receive Jesus. We have so much we could teach one another. So much we could offer a hurting world. Look, 500 years ago, Christianity took a big blow. We split (again). After 500 years, maybe it's time to start healing. Coming back together.

We can keep trying to do something new, I guess. However, I am sensing more all the time, that our souls are longing for the old. A deeper faith that ties us to our ancestors. Ancient practices intended to slow us down and usher us into holy places. It doesn't matter if it's Catholic, Orthodox, Lutheran, or Anglican. Not if it leads us to Jesus.