A Jewish Reflection On An Ancient Prayer

We've looked at Catholicism, then Orthodox Christianity. Today, I've asked my Jewish friend, Lisa, to do a guest post on the ancient prayer taken in part from Deuteronomy 6. After you read Lisa's words here, which you will love, consider buying the book she just released with my friend, Shelby Spear, a Christian writer. How Are You Feeling, Momma? (You Don't Need To Say, "I'm Fine."): Authentic & Encouraging Psalm Reflections on the Many Emotions of Motherhood.

I was probably close to 4 years old when I walked into the living room and noticed my Mama and Grandma covering their eyes. I thought they must have seen something really scary or yucky so I ran over to hug them, hoping this would make them feel better. My grandma smiled and patted my head.

We were praying a very special prayer called the Shema.

This as I recall was my first real lesson in what it meant to be Jewish. I loved pronouncing the word "Shema" but until I began attending Hebrew School three years later, I didn't appreciate nor comprehend the enormity of this prayer being the core of my religion. Then the Rabbi along with his learned scholars brought the meaning into focus. I can still hear his booming voice when we began our lessons in the "Shema." 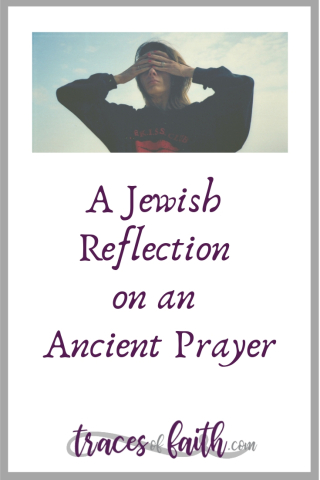 The Shema Yisrael is the prayer that all Jewish people around the world recite twice a day; once in the morning when we rise and again in the evening before we sleep. The actual word "Shema" means to hear or to listen. It surely sounded important. Then the Rabbi explained that the Shema represented the most important commandment in our religion. Now I had no doubt this was BIG time stuff.

When the Rabbi spoke the Shema in Hebrew we all raised our eyebrows, rolled our eyes and put out heads down so we wouldn't giggle. Hebrew sounded pretty funny when you were only 6 or 7. Thankfully the Rabbi was gracious enough to translate for his confused pupils. "Hear o Israel, the Lord is our G_d, the Lord is One." It sounded simple enough to us youngin's. The Rabbi made it sound even more so.

Do you know what this prayer really means?

There were no takers. My luck the Rabbi called on me the first day of the first lesson of the Shema. I was supposed to have studied my lesson before class. I'd been watching Howdy Doody and playing with my Thumbelina doll.
What I thought was a simple prayer made up of simple words turned out to be the essence of my religion. The Shema stood for the belief that there is One G_d and that HE is the essence of everything, everywhere. Nothing can exist without HIM. There is nothing in the universe that is not dependent on G_d. All that we perceive is an extension of HIM. Nothing exists apart or outside of HIM. It finally became clear that the Shema which, is really three Bible paragraphs is the central essence of the Jewish religion.
It has such significance that when prayed Jews throughout the land cover their eyes so as not to be distracted by anything around them. The focus is entirely upon the Shema, although as kids I will admit that we'd sneak a peek here or there at all the elders to see if their eyes were really closed.

The 2nd verse of the Shema translates to; "Blessed be the name of the story of HIS Kingdom forever and ever."
When I first heard the Rabbi recite this 2nd verse I remember he grew so quiet that I thought he lost his voice. We could barely hear him and every one of us had to lean in order to make out his whispers. It turns out that this verse is spoken very quietly on all days except Yom Kippur, when we nearly shout it with pride.

There is a 3rd verse of the Shema, which deals with the exodus from Egypt. I will admit that unless we're in Temple many reformed Jews in my family keep the main focus on verse one.
It's not always easy being Jewish in a country where anti-semitism still reigns mighty powerful. To witness the march in Charlottesville last year when white supremacists shouted "Jews will not replace us" was devastating. I was grateful my grandparents were not alive to witness that heinous display. To this very day, many still wish to dismiss the Holocaust as a figment of our imagination.
Yet in the midst of this hatred there exists glorious reminders of the goodness in all religions. It is my greatest hope and prayer that we can come together and find the common ground that unites us. We don't have to look very far; He's right here with us every step of the way.