Meet Traci Email Me Saturday-7 Things The Mic Shop Privacy
Eleven Memories
Lord, Have Mercy: A Thing Or Two About The Orthodox Church

Catholicism Is Not Contagious

A friend was editing an article I was submitting to an online magazine. In this article, I mentioned my ongoing exploration of Catholicism. This isn't the only tradition I'm exploring, but I have found they have a lot to teach me.

In her edits, she said,

I'm not sure how much you know about the magazine's audience, but should you make sure the readers are OK with Catholics? In my community, there aren't really any Catholic churches, and people don't call them Christians.

Now, I've come a long way myself, and this kind of reaction surprises me. In my self-absorbed existence, I often make the false assumption that other believers are moving forward in the same direction, and wholeheartedly accepting Catholicism as a branch of Christianity. That is, until I come across a Pinterest board entitled "Christian Bloggers" or something like that (I don't remember the exact name, and I did not follow the board). In their description of bloggers who can submit articles to their board, they mentioned "no Catholics." Harsh.

I've asked a number of my Catholic friends, and it's true. They have been accused of not being one of us - Christians. 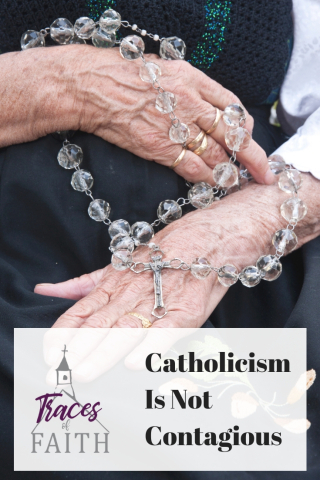 All of this gives me pause. I grew up in a small, Midwest town, and there was one Catholic church. Members of this Parish were also members of our community, and as far as I know, we all got along well. Still, I don't honestly remember if I thought they were Christians, like me. If I did acknowledge their form of Christianity, I would have immediately followed it up with a list of what I thought they did wrong. They worshiped Mary, they made a beaded necklace an idol, and they got drunk at the Knights of Columbus Hall.

In fact, I developed a litmus test I think many Evangelicals used in the 80s and 90s. If it appeared to be "too Catholic," forget it. An actual fear of Catholicism. Don't let that rub off on me! It appears some of us are still afraid. Holy water, Prayer beads, infant baptism, praying the Lord's Prayer on a weekly basis, reciting the creeds... I could go on.

Don't even get me started on church history, which happens to be ours too, you know. It's amazing and inspiring and we could learn a thing or two from the saints who have gone before us (I think they might even pray for us in heaven, but again too Catholic). Most Evangelicals, if they study church history at all, start at the Reformation, thus overlooking 1500 years of church history that belongs to us too.

I talked with a friend recently about praying The Lord's Prayer every Sunday in church. Our church doesn't do this, but I know many do. Her response was a common one I hear often,

In our area, many of the church goers came to our Evangelical church from a Catholic background. Reciting the Lord’s Prayer will feel too close to their life before Christ when it was spoken as a rote thing.

This kind of seems like blaming The Lord's Prayer for those who choose to say it in a fast mumble rather than slowly focusing on the words so rich in meaning, which could happen in any church. There's power and grace in saying it meaningfully in a corporate setting. With a little teaching, we could make The Lord's Prayer, and statements like the Creeds and Catechisms, for all of us again. Maybe, just maybe, if we explain to our congregations that as we slowly and meaningfully say these words, there are other believers doing the same thing, there could be some healing for the whole Church in these actions.

We have differences in theology and liturgical worship. I'm not here to argue that. Catholicism probably has some things wrong, but so does my Reformed tradition. Believers have a responsibility to examine their own beliefs, learn from trusted resources (starting with the Bible), and ask the Holy Spirit for discernment as they explore new practices. Learning from these brothers and sisters in Christ, who can take us all the way back to the church's earliest beginnings, is nothing to be feared.

Certainly, we can go about our Evangelical business and not learn anything new (or ancient depending on how you look at it) from high church traditions. There are no commandments in the Bible saying we have to do these things. While not mandated, you will find many of them biblical. If you'll learn from them, and have healthy, healing conversations with devout believers who practice their faith differently than you, I think you'll want to try some of these practices.  Evangelicals doing evangelicalism all by ourselves, we can do better than that.

As I took a closer look at Catholicism (Orthodoxy as well; but sorry guys, in my small town existence, I didn't even know about you), I discovered one beautiful thing after another. Not only things of beauty, but sacred things that helped me experience Jesus in ways I never had before. When I sat in the silence of a Cathedral, and watched the Priest prepare Communion, I wept. The spirit moved so freely, lightening my burdens simply by his presence in that place. I realized, at least for me, making the sign of the Cross ushers in a holy moment, after I take Communion at my own church, and any time throughout my day.

As the idea for this article came about, I turned to Twitter, and asked them to help with the title. I'm pocketing a few suggestions for future projects, but the title of this post came from Tim, "Catholicism Is Not Contagious." No, Catholics aren't contagious. Their form of Christianity might be though. Maybe that's a very good thing, and as Evangelicals, we're missing out on a lot by not asking them what they have to offer.