Lord, Have Mercy: A Thing Or Two About The Orthodox Church

Today I want to tell you about an orthodox group of believers in the Orthodox tradition. See, I am an orthodox Christian (according to wordnik.com: adhering to the Christian faith as expressed in the early Christian ecumenical creeds), but like many of you, I am not Orthodox. If I added Eastern to the Orthodox (EO), it would help clarify. Doing this however, would leave out our brothers and sisters in Christ who are Oriental Orthodox, which will not do. 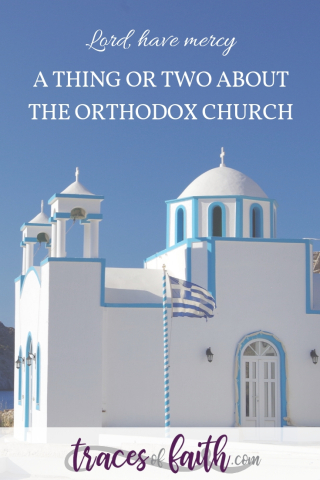 Confused yet? I have perhaps never felt more unqualified to write a post. God reminds me he often taps the shoulders of the unqualified. I'm also aware that many of my readers are Evangelicals from small towns, so I'm confident you won't know much more about the Orthodox tradition than I do. For many of us, it remains a mystery.

Speaking of mystery, Orthodox believers are comfortable with it. Much more so than Evangelicals are; as we try to prove, both scientifically and scripturally, everything we believe. God is much bigger than that. It's OK to not know everything. I'm more comfortable embracing mystery than being absolutely convinced of something, and being wrong. The Orthodox have taught me that.

Now, as I told you in my last post, I am from a small Midwestern town. We had one Catholic church, and no Orthodox churches whatsoever. You'd have to go to St. Joseph or Kansas City to visit an Orthodox church. I didn't know there was such a tradition, so I never visited.

In my 20s, I started reading about other forms of Christianity. I visited other churches outside of my Southern Baptist denomination, and even attended a Presbyterian one for a time in St. Louis. My faith was awakened in a whole new way as I realized for the first time that other denominations/traditions had wonderful things to offer. In fact, they'd already been influencing me, but I wasn't aware of it.

It wasn't until my 30s that I heard about the Orthodox tradition. A man who attended our church had a wife who was Greek Orthodox. My pastor casually mentioned to me,

You want to see a different kind of worship, visit them sometime.

Through my writing online, I met a few writers who practiced Christianity in the Orthodox tradition. One such writer is Coptic Orthodox, and she hosted a book contest. I won! In the package she mailed me, she included a Prayer Book called the Agpia, and a personal note. She signed it

Your sister in Christ, Phoebe.

From that day on, I determined I would learn a thing or two about the Orthodox church, because of this woman who extended such kindness to me by acknowledging our sisterhood. I know it's not wise to make a blanket statement, but in my experience, Orthodox believers have been gracious and forthcoming in explaining their church tradition to me. They want visitors to feel at home among them.

When I think of the handful of experiences I've had with the Orthodox, kindness is one of the first words that come to mind. I have visited an Antiochian Orthodox church in a nearby city (a different small town for me now, but still no Orthodox church) a number of times, and the Priest has been most generous to me. Several of the parishioners have sat with me, given me a tour of the church, and explained the 1,015 things I might not understand in an Orthodox service. I visited a Russian Orthodox church in Houston this summer, and had a similar experience. They shared a piece of their "blessed bread" with me after the Divine Liturgy (Sunday worship service) was over. They even invited us to stay for lunch.

When you walk into an Orthodox church, you immediately experience "other." It all feels foreign, even more so than a Catholic church, who offers a form of Western Christianity. And those things we don't understand about the Catholic church, the things I used to fear, you'll find many of them in an Orthodox church as well. They also pray to Mary (Theotokos), there are plenty of candles and incense burning, and you'll see icons everywhere. Almost everything in their Divine Liturgy is other. That's because they also trace their church practices all the way back to the days of the apostles of Jesus. It feels ancient because it is. What a great reminder that Christ's church is bigger, and older, than your local church!

We're not going to be fearful of these things anymore, remember? I've determined instead to befriend Orthodox believers, and ask them what they're doing. I'm going to call on the Holy Spirit who lives inside of me to help me find the beauty in their spiritual practices, and incorporate a few of them into my own faith walk.

Like the Prayer Rope. Orthodox believers use this small object as a tangible thing to hold while praying. It can be worn around their wrist or kept in their pocket. The one I was gifted by a writer is a braided rope made of black wool. It has a solitary blue bead that overlaps to form a cross where the two ends meet. They often finger this rope while saying the Jesus Prayer. It can vary a little in the text, but basically:

O Lord Jesus Christ, Son of God, have mercy on me, a sinner.

I carry my Prayer Rope in my purse, and in the two years I've had it, there have been times the Holy Spirit prompted me to take it in my hand. I felt an additional amount of comfort as I held this object on Palm Sunday in 2017, and prayed for the church that was bombed that morning in Egypt. On a more personal level, the day my daughter broke her arm, and we drove rapidly to the emergency room, I fingered that rope and alternated between The Lord's Prayer and the Jesus Prayer. I have learned the benefit of rote prayers, which can feel a lot like remembering to breathe, when your mind is too preoccupied to find the right words to pray. The Orthodox have taught me that.

PS Forgive me for all the errors I made describing the Orthodox tradition. Two of my favorite books I have found on this tradition will help explain it better than I can: Welcome to the Orthodox Church: An Introduction to Eastern Christianity, and Short Trip to the Edge: A Pilgrimage to Prayer.