A Church Service Where All You Do Is Ask Forgiveness 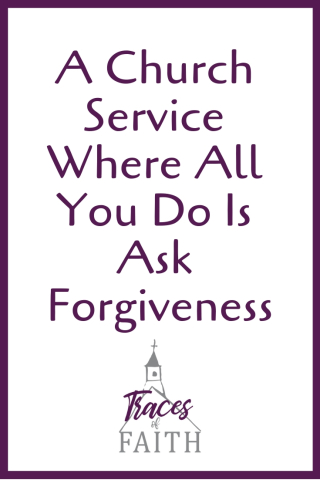 J: Yes, I'll meet you in the narthex! (that's the big open area just outside the doors to the church proper, there will be greeters and a visitor's table there).

Me: Oh, I’m glad she explained narthex - a new term for me.

J: I just realized there's a good chance I'll have to help with chanting during this service, and I can't remember if it's only towards the end or all the way through.

Me: I remember watching monks chant in a movie once. Maybe it’s something like that.

J: Would you like me to introduce you to someone who can sit with you throughout the service?

Me: Well, you’re a total stranger for the most part, and I was going to sit with you, so sitting with a

different total stranger would be better than sitting by myself. So, yes please!

J: Otherwise you can sit in the pew right near the chanters stand, and (if you feel up to it) I can get you when it's time to go through the line asking each other's forgiveness.

Me: It’s the last part I wondered about the most. Would I be able to go through the line asking each other’s forgiveness?

These were private messages, and my internal thoughts, from a woman named Janalyn days before I attended my first Forgiveness Vespers, which marks the beginning of Orthodox Christianity’s Great Lent. I didn’t know Janalyn, but we were in an Facebook community that discusses Christianity. She attended an nearby Orthodox church and offered to sit with me if I visited.

Frederica Mathewes-Green devotes a whole chapter to this service in her book, Facing East. She writes of her husband, an Orthodox priest, telling the gathered worshipers,

Now we are going to do something the devil hates. Any time brothers and sisters in Christ stand face-to-face and ask for one another’s forgiveness, the demons shudder.

After reading this book, I determined someday this Protestant Evangelical would attend a Forgiveness Vespers, because I’m all about making demons shudder.

I walked into the church’s narthex that Sunday evening and spotted Janalyn, from the likeness to her Facebook profile picture. I introduced myself and she brought me to Carolyn who I sat with that evening. Carolyn grew up Protestant, part of several denominations, before finding her way into Orthodoxy. A tradition she calls home.

Experiencing Vespers was a wholly unique experience for me. Each person venerated an icon before sitting down. They chanted rather than sang. There is a worship booklet but I kept getting lost. The smell of incense filled the room and we prayed “Lord, have mercy” intermittently throughout the service.

About halfway through Vespers, an individual switched the cloths on the tables and those hanging on the wall from white to purple. The priest moved into the Sanctuary, separated by a large icon screen (called the Iconstasis) to conduct parts of the service from there. 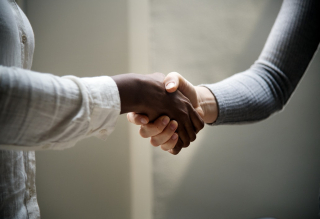 As we neared the end of our time together, the priest came back into the nave and explained what was next. He’d stand up front and people would file out of the pews and approach him. Bowing slightly, each of us would shake his hand.

The priest would begin,

Forgive me, a sinner.

The individual would respond,

God forgives, and I forgive.

After exchange words with the priest, you take your place in the receiving line. One by one each person in the room will ask for and receive forgiveness from everyone else.

Carolyn leaned over and whispered,

You don’t have to go forward.

But I’d been going forward in church all my life. It started at age seven, at that little country church in rural Missouri, when I went forward as we sang the hymn “Just As I Am,” asking Jesus to be my personal Savior. I didn’t recognize much in that Orthodox Vespers, but I knew how to go forward.

Afterward, we visited for a few minutes in the narthex. One man couldn’t believe I had fully participated in the service. His son agreed,

No way would I have done that my first time visiting!

Everyone thought you were extremely brave!

I thought about that. It hadn’t seemed all that brave; asking a roomful of strangers for forgiveness. A much harder, truly brave task is what the other individuals in the room did. They’d asked their church family to forgive them. The man who has different opinions on how to do Sunday School, and expresses himself loud and often. The greeter couple who often doesn’t show up for their shift. The women in the kitchen who don’t like anyone else using their appliances.

Would I be so brave if I stood face to face with the people who attend my church? Forgiveness Vespers reminded me, forgiveness isn’t always easy but we are called to it.