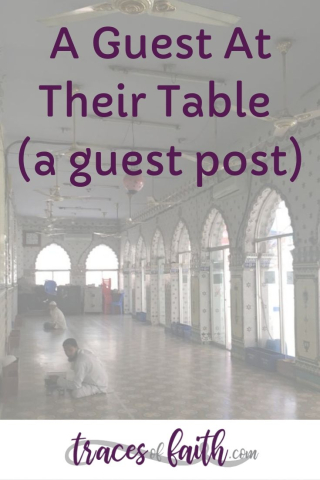 I could see her eyes widen briefly before she lowered them again, trying to make herself seem smaller in her chair. The gregarious Arab man sitting next to her scooted his chair closer and leaned in. I could see her distress from across the table as she nervously pulled her headscarf tighter, tucking away the piece of hair away that had tumbled out.

When I invited some friends from church to come with me to the interfaith dinner at a nearby mosque, I hadn’t thought about how much of a sensory overload this experience could be for someone new to the culture . The conversation unfolding across from me reminded me of that.

I scanned the room full of people pulling up extra chairs around already full tables. A cacophony of voices rose above the children laughing and plates clanging. English, Arabic, and a variety of Middle Eastern and Central and South Asian languages sang a song of diversity that felt like home to me. The gentleman that was currently making the girl from my church squirm with his theological questions about the differences between the Bible and the Qur’an spoke with a loud insistence not uncommon among my Arab friends; who show celebration, grief, or anger with equal intensity and volume.

When I lived in the Middle East I shared several iftar meals like this one with friends. Iftar in Arabic literally means, “break the fast.” It is the meal eaten after the sunset every day during the month of Ramadan. During the month, from sunrise to sunset, Muslims all over the world fast from food and drink (also from smoking and sexual relations).

Ramadan is a month of deeper focus on prayer, Qu’ran reading, and charity. In contrast to the restraint of the daytime, iftar feels like a perfect reflection of the hospitality and fullness that marks Muslim culture.

This particular meal awakened my memory bank of the other iftans I have attended. It was all there, the wildly beautiful parts of a Muslim celebration that says, “Welcome, there’s room for everyone here.” Even though many had finished a plate full of food, new dishes were still being added to the buffet. The flaky crumbs of samosas lingered on my plate but I wiped them aside to make room for a food that had been my favorite when we lived in Egypt.

These particular stuffed grape leaves had been painstakingly made by the cousin of my Egyptian Arabic tutor. In one of those “it really is a small world moments” a year after we moved back to Georgia from Cairo, I had received a call from an unknown number. My tutor’s cousin had just moved to the next town over and a week later I found myself seated again around her table full of Egyptian food, shaking my head at the way God must delight in surprising me.

That’s how I found the this mosque and its open doors, its invitation for the community to come during Ramadan and join in a meal and learn more about the local Muslim community and their practices.

Looking around the room I saw that it looks like welcome. I too entered the room with my eyes down, wanting to disappear a little like the girl across the table from me. I came as an observer, not wanting to intrude.

But as usual I see the Muslim community pulling me into a big bear hug instead, with a kiss on each cheek for good measure. There would be no observing that night but rather engaging. We rushed straight past introductions into,

You know Jesus is a prophet too in our holy book too, right? Hey, so what do you believe about the resurrection?

I laughed at the commonalities I saw here with what I’d come to love about life in the Middle East: open arms, open hearts, open debate, and always lots of good food. I was amazed at the way this particular community exhibited these traits so well, considering the great number of nationalities represented in the room.

Our small group attended the meal with us that night, coming from an overwhelmingly white church in the suburbs of Atlanta. Most churches in the Bible belt where we lived were segregated by nationality and race, even though the city just miles away boasts a huge international and refugee population.

Islam is so much more than a set of beliefs about the revelation said to be received by a prophet 1,400 years ago. It’s a culture and a way of life, evidenced by the connectedness in the room that night. Christians don’t tend to talk much about our way of life much as a culture, but we all have customs and norms that build up around our faith and the way we practice it. I found iftar wasn’t too different than from the Baptist church potlucks I knew.

Sure, there was curry instead of fried chicken. We stood barefoot on scratchy red carpet instead of barefoot in the green grass of the church lawn picnic. Some of the women covered their heads with hijabs instead of donning Easter hats. What we don’t often have in our Southern American churches that the mosque did have was brown faces leaning near to white ones, discussing the deep things of faith. I think we’d all have richer understandings of our faith and each other if we did.

That’s why I keep showing up at the tables and the places of worship of my brothers and sisters who practice faith differently than I do. They teach me how to better love my God, who lovingly created such diversity. They teach me how to better obey my God who said, “Love your neighbor as yourself.” I don’t just go to learn about their faith; I go to learn about my own.

Nicole is a writer who lives somewhere in the tension between wanderlust and rootedness. She makes her home in Georgia with her husband and two children but has lived and left parts of her heart in the Middle East and South Asia. She writes to help people create space to listen to God, learn from others, and lead lives that love. She has authored essays in several books and her writing has appeared in places like Red Letter Christians, CT Women, Fathom, and (in)courage. She is a regular contributor at SheLoves Magazine and The Mudroom and is a member of the Redbud Writers Guild.