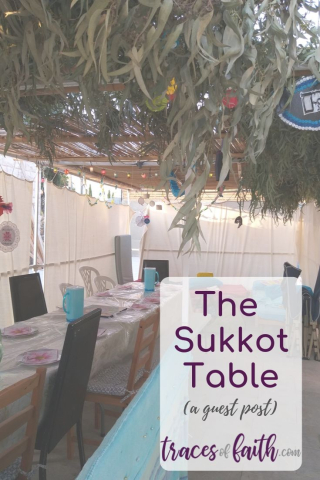 a guest post by MeirSimchah
This Sukkot - Israel's harvest celebration when Jews everywhere move out of their homes into lightly thatched huts - my family's holiday dinner grew and grew.
Sukkot is a pilgrimage festival [a 7-day festival starting at sundown on Monday, October 14th this year and concluding on sundown Sunday, October 20th]. In the days of the Temple, Israel gathered from across our land into Jerusalem to worship God in His Temple. Today, there is no Temple, but not a day passes without our asking God -at least three times - to renew our worship there. But that will be only the end of a long, complex, and messy process. An embryo undergoes gastrulation before it forms anything we'd recognize as a body part, and Israel needs an in-gathering of Jews before the kingship of David can re-emerge or the Temple can be rebuilt. That in-gathering is the most incredible fulfillment of the words of the prophets and the most down-to-earth feature of daily life in Israel.
For us this Sukkot dinner, it was seventeen people seated around the table in my hut in Jerusalem. Originally it was to be just my family - myself from Virginia, my wife from Genoa, Italy, and our four children all born and raised in Jerusalem. Then we were joined by a friend from Los Angeles, his wife born in South Africa and raised in Sidney, and their four children, again, all Jerusalem natives. But at the last minute more friends contacted us, so we were joined by a friend from Poland, her husband from Ukraine, and their two girls, again, native Israelis - all of whom slept over with us in the Sukkah and waved the lulav with us in the morning; and also by one more friend, widowed decades ago and without children but wealthy in friends, who splits her time between Rome and Jerusalem. Any two adults at the table could have conversed in at least two languages, but the only real common language among us was Hebrew.
Lunch was smaller. We were joined by my closest friend, a man several decades my senior, who scooped me off a park bench just after Sukkot fourteen years ago, when my framework for room and board broke apart, and his wife of several years. In English parlance, she is a "convert," but in Hebrew, we call her a "gioret tzedek" - literally, one who dwells in righteousness. She is originally from Boston. Her children grew up partially here and partially in the US. Her son-in-law runs an important non-profit that helps "lone soldiers" - young people who have come here from everywhere else to serve in the army and re-root themselves in our land. In contrast with his wife, my friend's tragetory into the present was radically different. His family lived in the Carpathian mountains. Before the war, his father and mother were betroughed to others but they were murdered. After the war, his parents were brought together by a troupe of liberating Russian soldiers who aimed to gang-rape his mother but who were foiled when her future husband pulled them off her body. My friend was born in a Displaced Persons Camp, on a date that varies from document to document. He grew up, initially among the First Nations of Canada, whom he later served as a doctor, and then on the streets of Montreal where he became an outstanding blues and funk guitarist. Today he writes poetry, in English, his fourth language.
When I look at my kids' classmates, I see our nation returning to itself. About half come from ethnically mixed families like my own. My oldest regularly asks me,

"Am I Ashkenazi or Sefaradi or Italian or what?"
"You're all," I answer, "today each of us is all of us."
"But which customs should I follow?" she presses (there are many details of religious practice that hang on the answer).
"Mine are a mix, and yours will be even more a mix," I assure her.

All who survive of all those nations that came up against Jerusalem shall make a pilgrimage year by year to bow to the King LORD of Hosts and to celebrate the Feast of Sukkot.

Indeed it is only ultimate integration that can truly answer our hope for the full expression of God's kingship in the world, as we sang just two weeks ago, on Rosh Hashanah:
וִיקַבְּלוּ עֹל מַלְכוּתֶךָ עֲלֵיהֶם...
וְיִשְׁמְעוּ רְחוֹקִים וְיָבוֹאוּ
וְיִתְּנוּ לְךָ כֶּתֶר מְלוּכָה

All will receive the yoke of Your kingdom...
The distant will hear and come,
and they will give you the crown of your kingdom.

###
Meir Simchah Panzer lives in Jerusalem and co-hosts holymadness.org - the Jewish podcast that questions everything. Talk with him at @MeirSimchah on Twitter or meirsimchah@gmail.com.