Meet Traci Email Me Saturday-7 Things The Mic Shop Privacy
Spiritual Leaders, You Know What To Do In A Pandemic
Reviews, Church Stories, and Launch Team Greatness (Oh my)! 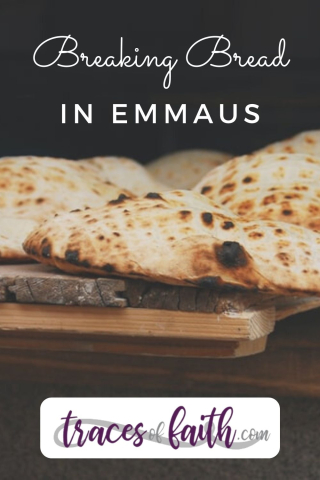 Every time we break bread together in the homes of other believers, I remember the time I broke bread with Jesus on the evening of his resurrection. Cleopas and I were headed to Emmaus. Truth be told, we were really headed anywhere but Jerusalem.

We had watched his crucifixion from a distance, convinced the heavens would open up and a legion of angels would rescue Jesus. Perhaps at that point, the Messiah would take his rightful place as the King of Israel. We could join forces and overthrow the Roman government once and for all. Thy Kingdom come, as he had taught us to pray.

Things didn’t go that way-not at all. Seeing our Lord dead on that cross, watching Joseph of Arimathea carry his body off to a tomb, hearing about the women who brought spices to anoint his dead body-only to find the body had gone missing-it was all too much. We took off for Emmaus, seeking some distance from the holy city and, if at all possible, a sense of clarity about what we were supposed to do next.

When the man approached us, we weren’t really in the mood for a conversation with a stranger. How could he not know what had happened? How could we put words to all that had taken place? We gave him a brief summary of what we had seen.

His response took us by surprise, touching our hearts. This man knew Scripture intimately. He talked to us of Moses and the Prophets. It was as if he knew them personally. How could that be?

As we approached the village, we extended an invitation for him to join us. This didn’t make much sense, even to us, but we were drawn to this man. Not just his words, but his presence.

At the evening meal, the stranger picked up a loaf of bread from the table. He gave thanks and tore off a piece for each of us. The instant our hands accepted the morsel of bread, our eyes were opened. We were dining that night with our resurrected Lord!

Suddenly, a flood of memories rushed over me. The time we sat among thousands of people, gathered to hear him preach. He fed every one of us in the crowd with five loaves of bread and two fish.

The very next day, we caught up with him in Capernaum. We were still amazed at how he’d fed us all, with baskets of bread left over. It seemed no one who spent time with Jesus would have to worry about hunger. He confirmed as much that day, although we’d have to walk a hard road before the Holy Spirit could teach us this truth.

We knew it to be true. The rest of our food that night in Emmaus remained untouched; our earthly appetites forgotten as our souls cried out to hear from Jesus himself. All we wanted from that day forward was more of Jesus.

Now, when we gather together, I join other believers in praying Jesus would reveal more of himself to us through his Spirit. Although individuals coming from very different walks of life, we pray we could be one even as Jesus and our Father are one. We worship together and serve one another in community.

Sharing communion that evening with our Lord, the Bread of Life, is a night I’ll always remember. It changed me forever.

*This piece originally appeared at the blog, unveiled and revealed.