Bible Study Recap of Women, Submit Yourselves To Your Husbands As Is Fitting To The Lord 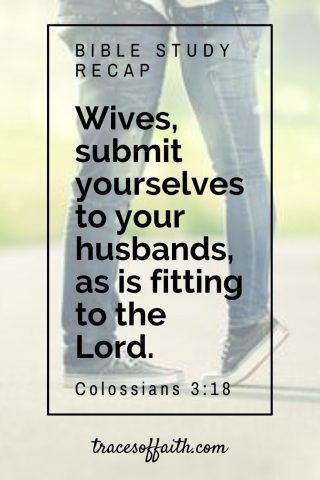 A women's Bible study in Michigan met to continue our study of Colossians. Three things we kept in mind as we examined the passage, Colossians 3:17-22.

Wives, submit yourselves to your husbands, as is fitting to the Lord. (NIV)

Wives, understand and support your husband by submitting to them in ways that honor the Master. (Message)

Hupotasso - Greek word translated submit, or be subject to in English. According to John Temple Bristow in his book, What Paul Really Said About Women, 'When used in the middle voice, in this voluntary sense, hupotasso means something like 'give allegiance to,’ ‘tend to the needs of,’ ‘be supportive of,’ ‘be responsive to.’”

Def. of the present passive imperative as used here: This word was a Greek military term meaning "to arrange [troop divisions] in a military fashion under the command of a leader". In non-military use, it was "a voluntary attitude of giving in, cooperating, assuming responsibility, and carrying a burden".

It's odd to me the majority of English translations choose the word submit to convey this hupotasso. Laying this groundwork, we quickly realized two things. 1) Unlike what society has taught us, women have an active role in this act of submission. This is not blanket permission for husbands to boss wives around. “As if fitting to the Lord.” Put that sentence first, then women offer voluntary cooperation, etc. 2) When a husband loves his wife and is not harsh to them, it’s an easy, natural thing to voluntarily be supportive of them. By and large, I’m in a marriage relationship like this, and I flourish in other areas because of it.

Of course, to get the full picture of any passage of scripture, you cross-reference. We did a bit of that. We considered the role children play, the instruction to fathers (not mothers) to not provoke, exasperate, aggravate your children, the instructions to slaves and masters (without condemning slavery altogether - yet).

Our summary of this passage, a few verses to a church in Colossae around 62 AD, is that once we’ve put on the new self (Col. 3:10) we relate to people differently. We consider Christ in every encounter. Wives give allegiance, show support and voluntarily cooperate with their husbands. Husbands (according to this passage) love their wives and aren’t harsh to them. There’s a mutual respect that was revolutionary teaching for the time.

I’ve seen plenty of examples in real life. Today’s strong women, who run businesses, schools, etc. voluntarily cooperating, even giving in to their husband, because it’s fitting in the Lord, the husband is loving and he’s not harsh to her. This is in a perfect world, which ours isn’t. Further examination of this passage raises questions about our response to husbands who aren’t loving, to the leadership expectations of single women, as just a few examples.

Our study book is written by NT Wright. We loved this sentence toward the end:

Paul offers only very brief guidelines about various relationships, and so he must have intended his audience to work out the details for themselves. It is no bad thing, then, for us today to do the same. -NT Wright