Rahab: A Woman of Grit, Abandon, and Surrender (A Guest Post) 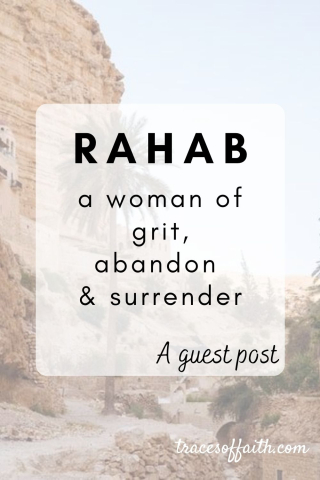 Grit, abandon and surrender. I doubt you've ever heard Rehab described that way. Most Bible studies and teachers refer to her as “Rahab the harlot”, “Rahab, the prostitute.” You won't get that from me. Not that those statement don't hold to the truth, they simply aren't needed to define her.

Rahab was a woman. One who was caught up in a dangerous life style. Most of my life I associated Rahab's lifestyle with her own free will choice. It wasn't until I started really digging into the culture of those times that I began to think differently. And although we can't know what what we can't know (since scripture doesn't explicitly state one way or the other) I think it's worth laying out the facts and taking them into consideration as we study Rahab's story.

So here's what we know:

These facts lead me to believe one of two things about Rahab. She was likely a victim of many horrible circumstances outside of her control OR if this lifestyle was indeed her choice something heavy must have led it to her. Both scenarios leave me deeply grieved. If I have learned one thing from the Bible it is this –

Did God Have A Purpose For Rahab's Life?

I've heard it said and often have quoted that, “purpose is where you're planted.” I'm learning not to get so comfortable with absolutes because there is always that one circumstance that defies them. I believe Rehab's story is one of them. Whatever the case I know this much, the oppression, injustice, brokenness embedded in Rahab's story, God could redeem it. He could take that brokenness and use it for his glory.

Have you ever looked at the messy parts of your life and wondered if God could make good of it?  Our limited understanding of grace and redemption often leads us to that conclusion, “my mess is too big.” I wonder if Rahab felt that same way.

Here's the cool thing about purpose – For a believer in Christ, a purposeful life has very little to do with what you make of your life and EVERYTHING to do with what God can make of your life. See the purpose of our lives can be summed up in just a couple verse of the Bible spoken by God Himself. “Let Us make man in Our image” (Genesis 1:26) and “be fruitful and multiply” (Genesis 1:28). Jesus confirms that this goal is still the same when speaking to His followers shortly after His resurrection. He commissioned them, “go and make disciples” (Matthew 28:18-20). So often we think of purpose as one single accomplishment; something we chase, a job that we do. It is actually far less complicated than that. We were created to bear His image and to lead others to Him.

Rahab's hardships, the sin in her life, the the judgment that followed her lifestyle, the culture of her people; none of that changed the fact that God created her with the desire to know and love her and build His kingdom with her. Purpose doesn't require perfection, it required abandon.

Living purposefully for Christ requires us to wholeheartedly abandon everything that separates us from God and cling to that which joins us to Him.

I mentioned Rahab being a woman of grit. I suspect she had been looking for an out. I don't believe she was content in her life and would even venture to say that she wanted something more; a God she could cling to, a hope she could believe in, a life lived well. She was desperate for it. How do we know this? Because she jumped at the first opportunity she had for freedom as witnessed in in Joshua 2:11-13,

And as soon as we heard these things, our hearts melted; neither did there remain any more courage in anyone because of you, for the Lord your God, He is God in heaven above and on earth beneath.

Now therefore, I beg of you, swear to me by the Lord, since I have shown you kindness that you also will show kindness to my father's house, and give me a true token and spare my father, my mother, my sisters, and all that they have, and deliver us from death.

Grit is defined as by the Oxford dictionary means “courage and resolve; strength of character.” We often look at the fact that Rahab was a prostitute and use it to assume her character. I'd like to challenge that.

Her determination to leave everything behind in order to live for the Lord is the very essence of what it means to live a God-inspired, purpose-filled life.

An Ongoing Conversation About Purpose

Purpose is a concept that has been greatly misunderstood by the church, yet there is so much the Bible has to say about it. In my upcoming book Purposed we're exploring the lives of women in the Bible and searching scripture to uncover what it actually means to live a life of purpose and how to answer that call as women in the church. To join the discussion, gain free resources, Bible reading plans, and exclusive update about the #purposedbook sign up here.

Lo is an Alaskan grown wife and mom, with an ever-growing love for Jesus, books, and sparkling cider. Most days you can find her in their cozy mountainside home, with the wood stove rolling, dessert baking and way too many Pinterest projects spread out over the counter. I am mostly known for my beyond goofy laugh and ability to make almost anyone smile. "I love serving the world by creating education and resources that inspire women to prioritize Jesus and Christ-like living."