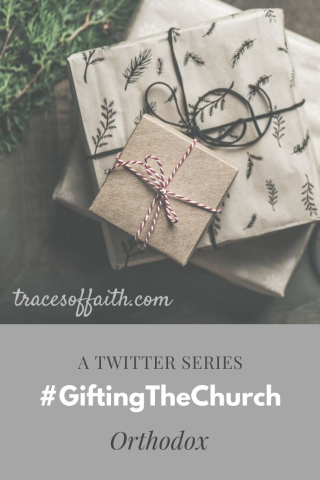 The series continues. Last summer, I asked a series of questions, "What has [fill in the blank] tradition gifted the larger Church?" The one rule was the answers had to be edifying, which twitter people are (mostly). You can find the results of this twitter series on my blog or using the hashtag, #GiftingTheChurch (thanks for the idea Pastor Daniel).

It started with a Frederica Mathewes-Green book, Facing East: A Pilgrim's Journey Into The Mysteries of Orthodoxy. After reading Scott Cairns' book, Short Trip to the Edge: A Pilgrimage to Prayer, I was hooked. I wanted to know more about the Orthodox branch of Christianity, which I only learned about in my 30s. Studying this branch of Christianity opened up doors to church history, early church fathers, a worldwide understanding of Christianity in general. Basically, it continues to expand my understanding of the Jesus movement, The Way. I'm thankful.

For me, a reminder that Church history isn't just the history of Western Europe. -Alexandra

Ah yes, including Christ Pantocrator, which is my favorite.

The Logos alone of this God is from God himself; wherefore also the Logos is God, being the substance of God. -Hippolytus (a.d. 170-236)