Meet Traci Email Me Saturday-7 Things The Mic Shop Privacy
A Rhythmic Walk Through The Sermon On The Mount
What Are Those Extra Books In Some Bibles? 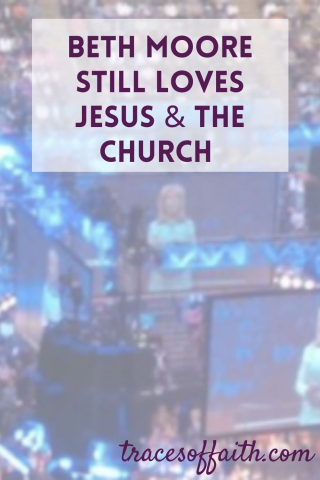 The other day, an online friend asked who served as a woman in their church today because of Beth Moore. I chose a gif as a response. A woman who had a smile on her face and, with both fingers pointing at her face, said “me!”

If memory serves me correctly, my first Beth Moore study was David: Seeking A Heart Like His. Other than Sunday school or Vacation Bible School, it was my first formal study ever. I completed each day’s homework, looking up the answers in my pink, faux leather New International Version Bible.

When it comes to faith, I grew up with Beth Moore. I went from an immature Christian who loved Jesus deeply, to a woman mature in my faith. Things I believed then, I see differently now. If your faith isn’t growing, if your actions don’t look a little more like Jesus all the time, it’s time to examine your faith.

So this blonde firecracker, Arkansan-turned-Texan took the stage, first with a small studio audience on a video screen, then in churches and arenas around the country. It must be hard to work out your faith with fear and trembling in the public eye like that. She has two daughters who grew up knowing her simply as Mom, who watched the whole career develop.

And develop it has. From Bible studies to non-fiction books, a fiction title, several audiobooks, and any number of supporting products. Social media came on the scene and Beth’s audience had public numbers, available for anyone to see (almost 972k on twitter).

It’s the way of the evangelical female world. We take a pretty face with a healthy dose of energy and charisma, and we fall in love.

Fortunately, when it comes to Beth Moore, she kept her focus. Some do not. In every study, in every book, in every interview, in every social media post, her message remains the same.

Jesus saved me. He loves us. I’ll spend all my days living for him.

Don’t google her. Just don’t. Serious accusations we throw around casually, like false prophet and wolf in sheep’s clothing. A heretic. Almost any post she shared on instagram or twitter is scrutinized with the most critical of eyes.

As the saying goes,

The proof is in the pudding.

Or to borrow from scripture,

Whoever abides in me and I in him, he it is that bears much fruit, for apart from me you can do nothing. John 15:5

Beth Moore has encouraged thousands of men and women to study God’s word. Locally, her Living Proof ministry serves their community, including opening up their offices for times of prayer. She has worked with groups on scripture memorization. Her daughters serve God as well, often beside her. Her social media posts often offer truths she’s found from her own daily time in God’s word. Her ministry numbers fluctuate and she keeps on serving Jesus.

In the polarizing world we live in, Beth Moore has come under attack publicly as of late. Men and women in her own theological camp have decided they disagree. This happens. It’s bound to happen. We are humans figuring out a life of faith in a broken world. We have yet to solve God. The attacks have become personal, dehumanizing. People have stopped engaging in conversation, and verbally attack her instead. So this week, she announced she was leaving. Not Christianity, not her precious faith, just that particular tradition.

You know those quizzes we see from time to time on here? Take this test and find out if you’re a lutheran, a catholic, a baptist, a presbyterian, etc. My guess is Beth Moore’s test results would still come up baptist. She even said as much in her interviews, but we don’t hear that part as clearly.

We pick up the slingshot. We hurl the mud. We use our tongue in ways James himself would condemn.

I consider the teacher I’ve known for twenty-five years now. I think of the times she’s made me laugh and cry. I think of what she’s taught me and how she’s taught me to study more for myself. I think of the ways my faith looks different now, and what a gift it is to be able to do that work privately, and in local churches who know me personally and support me. I think on how she's ministered to a whole generation of women who know they can be Bible scholars too.

I think of how I know, without a single doubt in my mind, Beth Moore still loves Jesus with all her heart. Because of godly people like her in my life, I do too.