What Are Those Extra Books In Some Bibles? 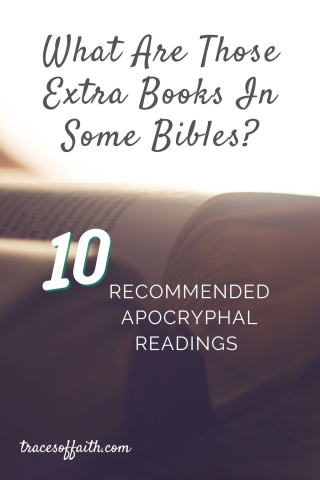 My friend is reading through her Bible in a year for the first time. I was excited to hear she was going to read the Bible daily. She was motivated to do this when she heard a promo video of Father Mike Schmidt taking an online group of readers through the Bible in this way. One Sunday, she pulled me aside at church to tell me about this endeavor. She said her parents were nervous about her reading the Bible with a Catholic.

She said, "Do they use the same Bible we do? I haven't noticed anything different so far."

I explained to her our Bibles are the same, with the exception of what is known as the deuterocanonical books (or the apocrypha), Old Testament books which have been recognized throughout church history. FYI, most Protestant Bibles have 66 books, Catholic Bibles have 73, and Orthodox Bibles have anywhere from 80-88. If you'd like to learn more, here is a book on the topic. Or here are a few articles that will help in understanding.

A Brief History of the Apocrypha - Westminster Theological Seminary

Why Do Churches Have A Different Number of Books in the Bible?

I'm not here to debate what books should be used in the canon of scripture. What I've learned about the decision-making and the history has fascinated me. It helps me realize Church is bigger than I can ever comprehend; it existed before I did, and will continue after I'm gone. My role is to be faithful to Jesus and the body of believers. Part of that faithfulness means developing a wider faith. One that goes beyond my evangelical roots. My focus is not on where I'm right and they're wrong. My focus is on removing the me vs. them mentality. I want to learn more about Jesus and Christianity from my brothers and sisters. One way I did this was by reading the apocrypha books for myself. Last summer, I formed a private twitter group with five or six people from a variety of church traditions, and we read these books together.

I don't expect you to read these seven additional books, plus additional passages in Esther and Daniel (like the Catholic and a few Protestant Bibles have in them). It took me a few months and parts of it were monotonous (my apologies to the faithful authors). I've decided to help you out by highlighting ten passages I'd recommend you read to get a feel for the teachings we miss out on when we never touch the apocryphal books. Setting aside the debate about canon or not, divinely inspired or not, these books can be learning tools. We read history books, historical fiction novels, and these books can also aid in our understanding. Especially if you're a Bible teacher, it's our responsibility to understand the greater scope of scripture.

I’ll tell you what Wisdom is and how she came into being. I won’t hide these secret matters from you. I’ll show you her very origins. I’ll lay all that I know of her in the open. I won’t skip past the truth. Book of Wisdom 6:22

These passages can be found easily using an internet search engine. Check out your shelf of Bibles at home too, and you might find one that includes the apocrypha books and you didn't know it.

Daniel (3:24-90 apocrypha) - The song of Azariah (Abednego) in the furnace and The song of the three young men

The story of Shadrach, Meshach and Abednego (or Amigo as my young daughter called him) is a Sunday School favorite. It made the story even more powerful to learn first Abednego, then all three men, sang praises to the God who rescued them from the fire. As we all know, there was a fourth men in that furnace, and he saved the men of God that day.

1 Maccabees 2-3 - Mattathias [Maccabees] and his sons

Have you ever wondered what happened in the 400 years between the Old Testament and the New Testament. I've heard them referred to as the 400 years of silence, which is offensive once we've taken the time to learn about faithful families like the Maccabees. My friend Michelle Van Loon wrote a great article about this idea.

The book is also known as Ecclasticus or the Wisdom of Sirach. In this chapter 26, verses 1-4 and 13-16 are suggested readings at Catholic weddings.

This particular passage was read recently at Prince Philip, Duke of Edinburgh's, funeral. Originally baptized into the Greek Orthodox church, he long attended the Anglican church with the royal family.

In the Protestant Bible, we read of two angels by name; Gabriel and Michael. The book of Tobit mentions another angel, Raphael.

Wisdom 3:1-12 - The destinies of the good and the wicked compared

Many churches use a formal outline of scripture called the lectionary. Using this outline, a congregation goes through the Bible every three years, including passages from the deuterocanonical books. Read Wisdom 3:1-9 as one example.

When I ask people about a favorite woman in the Bible, someone often mentions Judith. Many of us, of course, don't know who she is. However, she too has her own book.

Baruch 1 - Baruch and the Jews in Babylon & Confession of sins

We're introduced to Baruch, an scribe for the prophet Jeremiah, in Jeremiah 32:12-16. One of the seven additional books in the apocrypha is a book bearing the name, Baruch.

2 Maccabees 7 - Martyrdom of the Seven Brothers

This is perhaps one of the more memorable passages I read in making my way through the apocrypha last summer. It is not kid-friendly reading, but an incredible witness of those who have (literally) died because of their faith. May we never forget ours is a faith worth dying for.