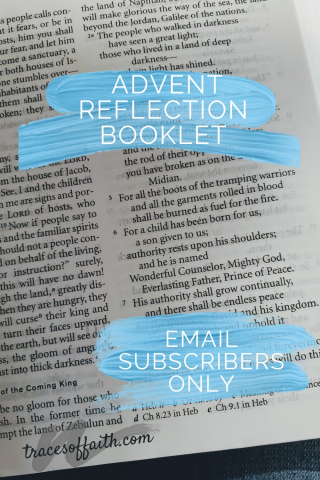 Last summer, my church asked if I'd like to partner with them on a project, which also included my artistic daughter and my English professor friend. I did the writing. Twenty-three reflections on passages taken from the revised common lectionary. Prophets, psalmists, epistles and John the Baptist all leading the way to Christmas.

We've put the reflections, along with some artwork, in a booklet for the advent season. My church has graciously offered to share it as a resource for my email readers. It will be sent out as a PDF in late November. Sign up to receive your copy here. I'll also be giving away a few print copies on social media, so be watching.

Here's an excerpt from what I'm calling "Bible study reflections."

14”The days are coming,” declares the Lord, “when I will fulfill the good promise I made to the people of Israel and Judah. 15In those days and at that time I will make a righteous Branch sprout from David’s line; he will do what is just and right in the land. 16In those days Judah will be saved and Jerusalem will live in safety. This is the name by which it will be called: The Lord Our Righteous Savior.”

By the time of Jeremiah’s prophetic days, the Jewish nation had split in two. Israel (the northern kingdom) fell to the Assyrian nation, forced into exile. Judah (the southern kingdom) fought off the Assyrians, but would later fall to the Babylonians. The major and minor prophets at the end of the old testament (so labeled because of the size of each book), spoke prophetic words during these tumultuous times. Often, a prophet from the southern kingdom would travel to the north with a word from God, or prophets like Ezekiel, also a priest, prophesied while exiled in Babylon.

Jeremiah stayed in Jerusalem; and specifically, in Judah (the southern kingdom). He was there when King Zedekiah, Judah’s last king, was taken to Babylon. He lived among the ruins in Jerusalem with the Temple defiled and all but abandoned. During his days as a prophet, he was thrown in a dungeon, held under house arrest, and even briefly taken to Egypt.

When reading scripture, context matters. We’re reading ancient words the people would have heard not read, as most were illiterate. Jeremiah, and all the prophets, lived during a specific time in history. He prophesied in Jerusalem, but we’re told in the ninth chapter of Daniel, his message reached the exiles too.

In Jeremiah’s day, nothing made sense anymore. Friends and family were separated, the Holy City lay in ruins, and the people in exile wondered if God was going to show up. We know the rest of the story; those exiled in Babylon stayed in that country for seventy years before being allowed to come home. Some returned, and others assimilated into the foreign culture. But at the point in today’s passage, all the people of God could do was wait, and hope.

Enter advent. The church’s season of waiting. We too live in days when things don’t always make sense. Holy things around us are often defiled, and the faithful seem assimilated to the ways of our world. During this season, we’re going to look closely at what the Bible says about waiting. Christ has come, Christ will come again. In between, we observe advent (literally “coming”).

Knowing all this, I’d encourage you to read today’s passage again. It’s a message of tremendous hope; then, now and forever.

“God of the universe, revealed to us in Holy Scripture through the writings of the prophets and the preaching of John the Baptist, you have called us to prepare our hearts for your visitation. Ready us afresh to hear your word and to respond as faithful servants.” Amen

Worship the Lord: The Liturgy of the Reformed Church of America