Her View From Home: I'm Raising A Country Kid 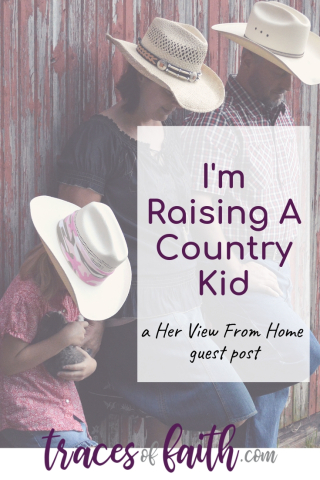 This post originally appeared at Her View From Home.

In my twenties, I found myself young and single, so I did the city thing. At the first sign of a mild-weather spring day, I would leave work a few hours early and head to the zoo. It was a short walk from my apartment. If you turned the other way, you were only a few blocks from an excellent Mexican restaurant.

As newlyweds, we did the suburb thing. Riding our bikes this time, on Tuesday nights we could get pizza and a pitcher to drink for $5 while listening to a hidden gem artist at the local pub.

When our conversation turned to starting a family though, having a child, we both wanted to return to our small town roots. A place where we are known; surrounded by grandparents, other family members, and neighbors who feel like family.

Once I had our little girl and saw that great fire of independence in her eyes, I knew we needed land situated in the middle of nowhere. I wanted her to grow up not only small town, but country like I did. It was already in her, I could see it.

I wanted her to be somewhere where the people wave as you drive by, not because they know you necessarily, but because you’re both from here.

I wanted her to know the importance of serving in a smaller church because it takes all of us to worship.

I wanted her to listen to songs by George and Garth and the other George, and know what they were singing about deep in her bones.

I wanted her to know what it was like to make a long list of errands you’d need to run next time you headed into town.

I wanted her to learn how to entertain herself for days because when you live miles away from town, you’re not always on the go.

I wanted her to know where her food came from because she’d helped care for the land and the animals that provide it.

I wanted her to choose when to invite company over and when to enjoy being home alone.

I wanted her to have the freedom of wandering in the woods and along the streams.

I wanted her to fall in love with a dirt road in all its seasons: winter, summer, fall and spring.

I wanted her to go on walks to the neighbors with her dogs by her side.

I wanted her version of lights not to be city lights, but lightning bugs and bright stars.

I wanted her to have a neighbor who taught her how to do things in the home and around the farm like my neighbors did.

I wanted her to learn how to ride a bicycle on gravel because that’s harder and the challenge would be good for her.

There are plenty of ways to raise a child well. I have no problem with a small town girl or a city boy. When I had a little girl of my own, the only way I knew to raise her was out here in the country. So I am.

For more writing like this, check out my Her View From Home essay, "Five Qualities Found In Every Small Town Person."